We all make mistakes. For people living in snow-prone areas who invest in a composite roof, but decide against snow guards, the mistake may be evident after the first major snow fall.

The function of the snow guard is to create friction between the composite roof’s surface and the snow/ice that settles on the roof. The snow guards help break apart melting snows so that homeowners don’t have an avalanche of snowfall coming down all at one time on landscaping or in front of entry doors. 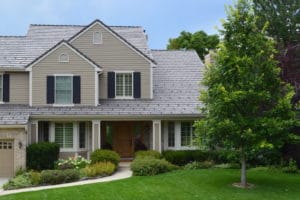 What are Snow Guards?

Snow guards are small metal pieces that are strategically placed on a DaVinci composite roof (usually on the bottom portions and around key areas) to help snows melt more evenly to reduce the avalanche effect. As the sun warms, accumulated snow on a composite shake or synthetic slate roof, the masses of accumulated snow can slide off in large chunks, causing an avalanche effect.

Here’s a quick explanation of how snow guards can help a DaVinci roof: they act as “breaking barriers” as snow melts and slides off the composite roof. Rather than experiencing an avalanche of snow that comes down all at one time and can harm landscaping and block doorways, snow guards help regulate the release of snow from synthetic roof tiles.

Leave it to the Professionals

Because snow guards are installed on composite roofing shingles around the perimeter of the roof (usually on the lower portion), this is a project best left to professional roofers.

According to Lars Walberg, President of Rocky Mountain Snow Guards, “For a retrofit application you need to apply sealant to the top of the DaVinci shingle where the snow guard will be placed.

Walberg goes on to say that, “The appropriate snow guard to use in this application is the ST9 by SnowTrapper which is available in copper or dark bronze coated aluminum.”

According to Walberg, roughly two-thirds of the snow guards his company sells are for retrofit applications. He recommends the SnowTrapper ST11 for all DaVinci slate profiles, single-width and multi-width shake up to 9/12, and Bellaforté Shake up to 7/12. For Bellaforté Shake over 7/12 and slate profiles over 9/12, we recommend the RockyGuard RG10.

There are certainly other snow guards by other manufacturers that would also work well with composite slate and simulated shake roofing. At DaVinci Roofscapes, we don’t recommend or endorse products that we don’t manufacture, but we do support Walberg’s installation method.

Snow guards can be retrofitted fairly easily to composite slate or shake roofing products, and it’s best to be prepared for potential bad winter weather. The steps a professional roofer takes to evaluate and install snow guards are outlined by Walberg: