A Roofer’s Perspective: Re-Roofing Challenges with an 1897 Court House

Where one is born has a lot to do with identity. In grade school, our teachers seek to help us memorize facts about our states, their capitals, and maybe even the state bird or tree, but seldom the name of the county within which we reside.

There are over 3,100 counties, parishes, or boroughs in the United States. The majority of these political and geographical areas have a grand, central structure that serves these divisions as a place for government business, voting, paying taxes, record keeping, or conducting court for the law of the land.

Most of these buildings are located as county seats, centrally situated in a city, town, or burg and were constructed many years ago. And, as a good many of these buildings are designated historic structures because of their age and grandeur, they have suffered over time from fires, deferred maintenance or severe weather events.

The roofs on these court houses are often complex architecture with towers, domes, cupolas with statues, curving valleys, practically anything that made a statement to the identity of that particular county.

One such roof structure that Delta Innovative Services of Kansas City, Kansas was awarded a contract for roof and gutter replacement was the Cass County Courthouse located in Harrisonville, Missouri. Constructed in 1897 in the Italianate style, the storm damaged second roof and 120-year-old copper flashings had finally given out and the County Commissioners voted in favor of moving forward with renovations in early 2018.

This hipped roof had been replaced in 1996 with a lightweight, offbeat style, concrete and EPS foam, shingle panel that was destroyed by hail in 2017. The original copper gutter system was not replaced at that time and is integral to the cornice above an ornate, bracketed copper soffit. 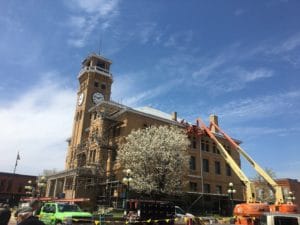 There is also a 110-foot clock and bell tower off of one corner of the main roof topped with a hipped roof of the same failed material. There are four chimneys in the field of the roof of which two rise 30-feet above the roof level from zippered valleys and coppered half-crickets. Three small low-sloped roof areas at the tower and main entry complete the complex.

The contract called for a total removal of the existing roof and integral guttering which would determine the extent of wood deterioration and allow for remediation. A conventional, visual attic and roof investigation indicated that the roof deck was generally solid with only minor repairs required during the tear-off, but there was no access to view the damage to the soffit framing below the gutter without its total removal. It was also difficult to determine masonry conditions from the ground.

A single sentence in the bidding documents to “respect the historical structure” lead Delta to propose both a manufactured slate with an alternate for the genuine article, shards of which had been discovered in the attic below the chimney penetrations through the decking.

After the installation of a stair tower access point and covering of a long, public handicap ramp, the roof removal process began in late March of 2018. The steep slope roof removal proceeded quickly because the existing material was designed to be “loose-laid” without fasteners and several areas had already been lifted from strong winds. The existing copper, built-in gutter trough was also removed in sequence with the roof areas.

It became apparent that the original wooden roof decking was in satisfactory reusable condition except for the single board covered by the apron of the integral guttering. The horizontal board underlying the actual tapered trough required complete replacement, obviously related to failure noted at the soldered joints.

While replacing the trough substructure, more and more framing members of the soffit overhang were discovered to be so deteriorated as to cause the crews to question how the existing ornate copper soffit was still in place. Upon further exterior destructive investigation, it became clear that the installation of the soffit was precarious, at best. There was even a section where the soffit had been chained to prevent its collapse.

The soffit was bordered with the typical, broad copper crown molding and fascia, above the corbelled soffit and brackets adorned with curved acanthus leaf noses many of which were open due to the loss of the tack welds so common in the timeframe of its construction. Delta further noted that the nailed attachment of the outside edge of the gutter trough and the top of the crown molding was the only visible anchorage. The majority of the soffit was found to have been steel wired to the gutter trough wood framing gussets and the interface to the building rested upon a masonry water table ledge. 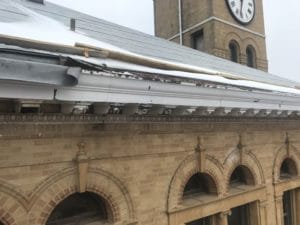 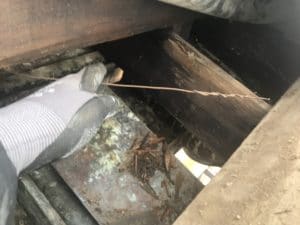 Most all of the nine-gauge stove wire attachments were burnt through by electrolysis because of moisture and dissimilar metals causing the soffit to pull away from the building. This action and the open brackets created an easy source of entry for birds and their nesting habits which added considerable weight to the already precarious soffit, and required a trained professional subcontractor to remove the hazardous debris.

During the abatement process, one unusual nest was discovered and initially identified as a peregrine falcon nest, a bird of prey on the Endangered Species List. With a bit of panic, Delta suspended work that morning until State Conversation agents arrived and identified the nest and nonviable eggs to belong to the common American falcon and work was allowed to continue.

It is rare to encounter such an experience, but work on historic structures always can reveal surprises that potentially result in delays and added expenses. In this case, the project did not have to wait for the fledglings to take flight.

While staging the soffit work out of large snorkel lifts, a better observation of the masonry condition of the two tall chimneys revealed serious deficiencies to the mortar. The Commissioners acted quickly to Delta’s proposal for their subcontractor to 100% tuckpoint both concurrent with the soffit and gutter remediations with only a slight delay in the overall project.

With extensive masonry and carpentry repairs completed, Delta crews began the installation of the new Bellaforté Slate composite roof system utilizing a high-wind nail pattern upon the clock tower and the lower level of the main roof field around it. Installation of the system proceeded quickly with nail guns driving the stainless steel fasteners. The actual roof installation was the fastest part of the overall project.

Moving on to the Tower Roofs

The last phases of the roof remediation were two small low-sloped roofs, one upon the clock tower below the hipped top and the second covering the main entry canopy. The tower roof was an old locked seam and soldered roof system covered with asphaltic patch material. The entry roof was covered with a solid two inches of felt plies over the field and down into an integral gutter detailing the perimeter. 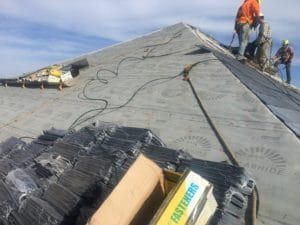 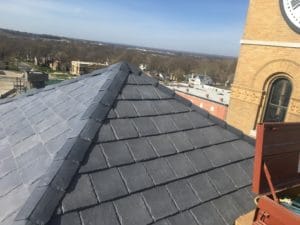 It was determined to overlay the tower roof and completely remove the entry roof; apply a base to just the entry, and then install a high-performance silicone roof system. Coordination was critical to installing the tower roof as the County’s array of satellite dishes for internet service were located there, and they could not be disconnected, but for very short periods of time.

The entry roof removal revealed even more rotten substructure than was initially determined through destructive investigation, and it was practically rebuilt with very special attention paid to the concrete balustrades resting upon a deteriorated beam. While the woodwork hurdles were being overcome, the entire deck was receiving a fire-rated, self-adhering, modified bitumen as the “dry-in” sheet and the base for the new reinforced silicone roof system.

Silicone was chosen for its excellent performance and resistance to standing water as it was to be applied continuously from the roof field of the entry and into its built-in gutter trough. A light tan color was selected for the entry roof to tone down the coating’s high reflectance values and potential bounce into offices through adjacent windows.

Cass County and Harrisonville, Missouri have now preserved the central identity related to the area and the manner from which they have grown as a community since their historic courthouse was constructed 121 years ago. Delta Innovative Services, Inc. and DB2 Services, Inc. are most proud to have earned the confidence from this community to respect the historical structure so central to the core values of the people in the County.