Wondering what color slate was most often found on American homes built from 1785 to the early 1900s? The best way to get to the answer to that question is to first focus in the period style of your home. Then find out what colors were used when it was originally built. You will also want to look at whether the roof was a single color or multi-color blend. Here is what I found to be the most common slate colors by style during this period. 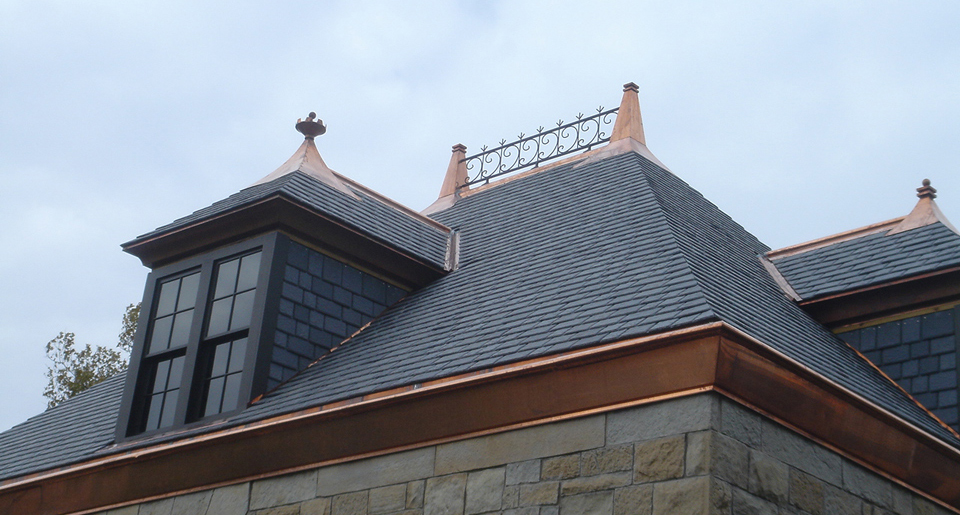 In the earliest style homes in the American – Colonial, Federal and Neoclassical –  slate was not often used because it was not widely available. These homes were roofed originally with wood shingles rather than slate. Occasionally slate would be found on homes of this style if they were built close to where slate was being quarried. The color would vary on what was found locally.

For example in Vermont and New York there are many different colors of slate – greens, greys, black, purples and red. These same quarries also produced slate mottled with two or more colors – green and purple, grey and black for example. In Virginia, the slate is more of a blue black whereas slate produced in Pennsylvania are very dark black. Even within the same area slate quarries could yield different colors and even within a single quarry different colors were extracted.

Today, homes of Colonial, Federal and Neoclassical styles have replaced their original shake roofs with slate. The most popular choices seem to be gray or black roofs. If you want to be a bit more adventurous while remaining true to the period you could investigate what other slate choices might have been found in the area at the time your home was built.

Gaining popularity a little later in the century, Greek Revival homes also typically originally had wooden shingles in most areas of the country. The exception to this was homes built In the Northeast where slate was quickly gaining popularity. These homes had a variety of color depending on what was being extracted from the nearest quarry, but the most common colors are black, gray, followed by red, blue, purple and green.

About 1840, the Gothic Revival style was gaining popularity and the railway was enabling the slate industry in America to have wider distribution. The quarries started producing more roofing slate to meet growing demand. Slate was considered the material of choice for Gothic Revival homes. Dark single color slate and later multi-color slate patterns that mixed in purple, green, red and blue adorned the Gothic style.

Second Empire with its characteristic mansard roof was also often clad in slate. For most homes a single darker or variations of lights to darks in a single hue was used. Some buildings and homes also employed various colors in a pattern on the roof.

Victorian homes were built to impress. They used various slate colors and a combinations of roofing styles that included towers and turrets. Like the many colors used to accentuate the trim, multi-color roofs were used for emphasis. Purple, blue and green were popular choices to mix with gray or black to adorn this style home.

The beauty of DaVinci Slate is that you can choose from all of the colors once only available regionally. Each of the 50 colors was inspired by colors naturally quarried throughout history. With is natural appearance even the “boldest” color choices is going to look at home on any early American architectural styles.

If you want to know what colors would be right for a variety of other style homes you can find the answers in the free ebook FRESH Color Schemes For Your Home Exterior.