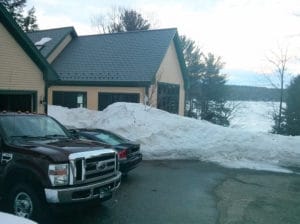 The Spring thaw couldn’t come quick enough in 2017 for Tim Carter. That’s when he truly appreciated his snow guards.

A New Hampshire resident, Tim and his neighbors saw lots of snow during the winter of 2016-2017. At one point, they had about 42 inches of snow on the ground … and around the edges of Tim’s driveway snow was piled up to eight feet for several days.

That’s a lot of snow.

Imagine if all the snow that accumulated on Carter’s composite roof slid off, onto the ground all at once. That’s a ton of snow and ice that could be damaging to things below.

Fortunately for Carter, he didn’t have those troubles. When he installed his new DaVinci composite slate roof two years ago he added snow guards.

“This winter really showed that the snow guards performed extremely well,” says Carter, founder of AsktheBuilder.com. “When the snow slid off the composite roof, the snow guards made sure that giant slabs of ice and snow didn’t crash to the ground. The snow guards were especially beneficial where there are walkways beneath the roof overhang. They helped hold the snow and assure that it was safe to walk below. 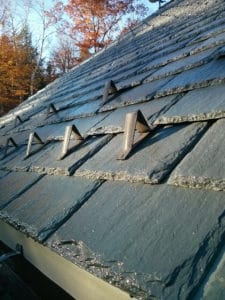 “All around the house the snow guards did their job this winter. I had installed expensive Trex Transcend decking this past autumn. The snow guards ensured that the deck didn’t suffer from a hit from a ‘roof iceberg’ at any point.

“From my perspective of really living through a major snowy winter, I urge homeowners and roofers alike to strongly consider adding snow guards during the composite roof installation process, and to make sure the roof structure can support all the snow that the guards will retain on the roof.

“Dealing with a qualified snow guard manufacturer is key to success. When I worked with Rocky Mountain Snow Guards they created a specific snow guard placement plan for my composite roof that I followed. That’s a critical element in this process that has proved successful.”