Visitors to Ed and Susan Abel’s historic home in York, Pennsylvania usually compliment the homeowners on their slate roof. Except it’s not real slate. It’s synthetic slate from DaVinci Roofscapes.

When the 6,000 square-foot stone home was constructed in 1840, it did indeed have natural slate on the roof. And that slate lasted for 150 years until it became brittle and needed to be replaced.

“In 1990 we decided to create a major addition to the houses and added 4,000 square feet,” says Ed Abel. “We wanted a bigger place. It became apparent that the old slate roof needed to be replaced so as we created the addition we re-covered the entire roof in asphalt shingles. I don’t mind admitting that was a mistake.”

To bring the historic home back to its original look, the Abels worked with Fisher Brothers Exteriors in 2017. 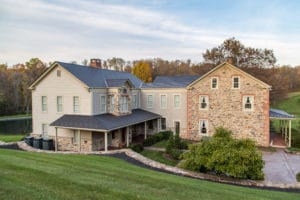 “I looked at every slate product in the marketplace,” says Abel. “We spoke with several roofers. When I met the team with Fisher Brothers I was impressed. They brought me samples of products and highly recommended the synthetic slate from DaVinci Roofscapes.”

From Lee Fisher’s perspective, the asphalt shingle roof was fairly worn, but perhaps had a few years of life left in it. “I respect the idea that Ed wanted to get his farm house back to the original look of slate,” says Fisher, owner of Fisher Brothers Exteriors, LLC, out of Paradise, PA. “When I understood that an authentic look was his goal we stepped in with the DaVinci product as our strongest suggestion.

“The DaVinci Single-Width Slate product in Slate Black that we installed on Ed and Susan’s house looks more defined and genuine than other products I’ve seen from different manufacturers.”

Abel agrees. “Most people have looked at that roof for the last year and they think it’s natural slate,” says Abel. “I’ve had people tell me that the roof really makes the house pop.”

Working with a Talented Team

Since the roof was installed in 2017 it has weathered a variety of storms. 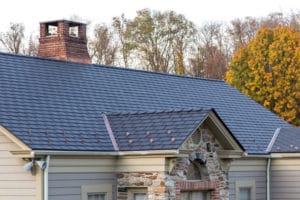 “Last year was unbelievable,” says Abel. “We had fierce thunderstorms and driving winds. One day we even had 11 inches of rain! The roof has held up very well under those conditions.”

Abel doesn’t reserve his praise for just the roof. He’s also impressed with the quality of service provided by Fisher Brothers.

“Lee and his crew were very professional and exceptionally diligent in their work for us,” says Abel. “From start to finish they gave this project 110 percent of their dedicated attention.

“We’re fortunate that we selected a synthetic slate roof that works for our home and that we had a top quality roofing company to install it. From the very first day it was installed I’ve liked this roof. It looks authentic and makes me feel good about bringing the original slate look back to our home.”