Back in 2010 we started sharing stories related to composite roofing being used in the Atlanta marketplace. First it was installed on the St. Regis Hotel. Then over the years, homeowners in locations like Longleaf Subdivision started seeing the benefits of composite slate and shake materials. Now the aesthetically-appealing composite slate product can be found on two homes in the city’s prestigious Buckhead area.

“We recently re-roofed two houses with Bellaforté Slate on the same street,” says Charlie Yood, president of Rosie’s Roofing and Restoration in Atlanta. “The first project involved a client who was interested in bringing back the original slate look of his roof — but they needed a lighter weight material than heavy natural slate.

“The second project was three doors down. Their traditional asphalt shingles had worn out and the roof had started to leak. For both homeowners the answer was composite slate roofing from DaVinci Roofscapes.” 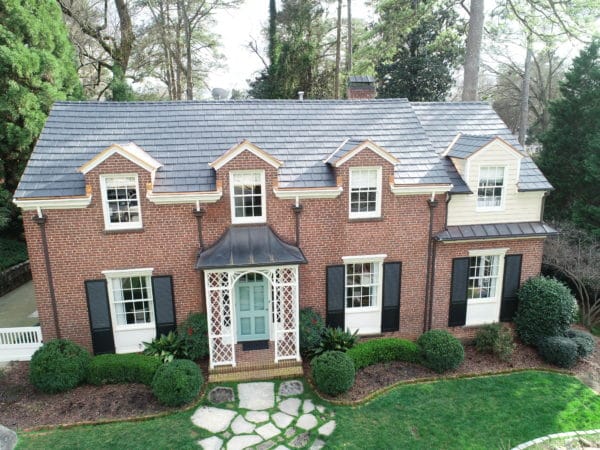 “Our home is 85 years old and it originally had natural slate,” says homeowner Michael Harrison. “Somewhere in the home’s history asphalt shingles were installed. They became old and we had areas where the shingles were warping and cupping. Plus we had moss growing on portions of the garage. The entire roof took away from the beauty of our home.”

When Yood and his team came in for a consultation, they were able to do a mockup of the Bellaforté product laid on Harrisons’ roof. Once the homeowners saw the random spacing pattern and authentic look of the composite slate tiles they moved ahead quickly with the project.

“The composite slate has great curb appeal and the look has truly lived up to our expectations,” says Harrison. “Several of our neighbors have told us they’re suffering from ‘roof envy.’ Right about that time I think the Wood family down the street hired Rosie’s to install the exact same DaVinci roof!”

Indeed, the appeal of the composite slate on the Harrison home drew the attention of homeowner Garret Wood.

“We had several leaks over the years in our asphalt shingles,” says Wood of the roof on his 1941 home. “Recently we developed a more serious leak and knew there was no point repairing it again. We watched the Harrison home get their new synthetic slate roofing material and really liked how it truly looked like slate.” 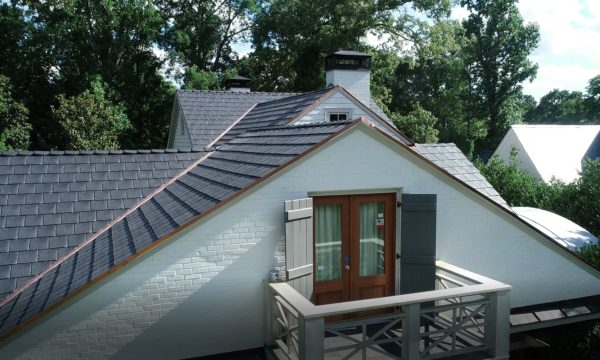 The next step brought Rosie’s Roofing and Restoration back to the neighborhood.

“Older houses were never framed to handle the weight of natural slate, so when homeowners fall in love with the look, it’s best to explore composite slate options,” says Yood. “The Bellaforté Slate proved to be the right choice for this house as well.”

According to Wood, he and his wife are extremely pleased with the composite slate material on their roof.

“The longevity of the DaVinci product really appeals to us,” says Wood. “We don’t plan on selling our house anytime soon. But, it’s good to know that if we ever get to that point, we’ve invested in something that is so durable, and backed by such a strong Lifetime Limited Warranty, that it will last for a long, long time.”

It’s too soon to call the installation of composite roofing in this community a “trend,” but it’s not too soon for Harrison and Wood to share their recent roofing experiences with Yood and his team.

“Our DaVinci roof looks great and Rosie’s team was very professional,” says Harrison. “Charlie Yood is a class act and I’d recommend him to anyone looking to install a new roof.”

“Overall, we had a great experience with the team from Rosie’s … and we’re looking forward to seeing their trucks pull up again soon in the neighborhood to tackle another roofing project!”