If you’ve ever watched the national weather forecasts, you know Alabama gets hammered on a regular basis. From tornadoes to hurricanes, the weather in this southern state can break almost any roof. Except a Bellaforté Shake roof from DaVinci Roofscapes.

Back in 2013 the Hollingsworths had our synthetic shake roof installed on their home. Since then, they’ve been completely at ease during storms and severe weather.

“I know the DaVinci roof will do its job each and every time,” says homeowner Jeremy Hollingsworth. “Here in the Deep South we get it all. Immense heat, daily afternoon spring and summer storms, tornadoes, even a bit of snow every year.

“In the past 7 years this roof has seen it all. And, it hasn’t warped, buckled or faded. There hasn’t been one lost tile, not even a dent!

“People still drive by and slow down to look at our roof. The shakes are so realistic. This roof adds to the curb appeal of our home.” 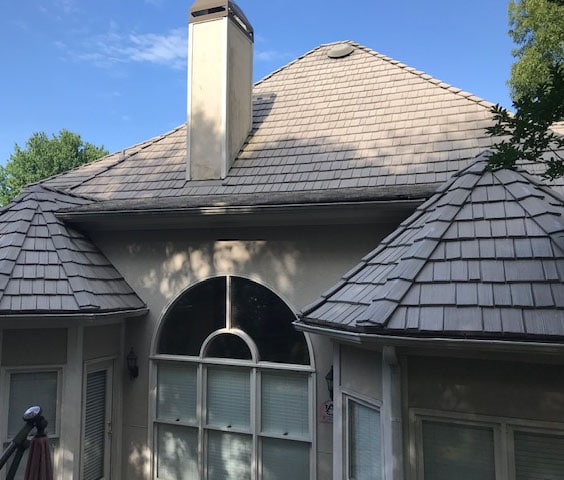 Hollingsworth, the publisher of a publication called HOME Improvement & Repair, has lots of home industry experience.

“I originally got the Bellaforté Shake roof after seeing it at a trade show,” says Hollingsworth. “Between us, the editor-in-chief, Matt Weber, and I have 36 years of experience with product reviews, DIY projects and professional building industry work. This composite roofing is one of the most impressive products we’ve seen during our combined time in the marketplace.”

For Hollingsworth, the durability of his synthetic shake roof really proved itself about 3 years ago.

“This synthetic shake roofing beats all the odds,” says Hollingsworth. “A few years back I lost 5 big trees from a tornado. There were major limbs from tall pines on my roof. My neighbors had similar damage. While 4 of them had to get new roofs, our roof was absolutely fine. The composite material from DaVinci is unquestionably more durable at handling whatever Mother Nature wants to throw its way.”

When Hollingsworth first had his roof installed, we showcased it in a DaVinci blog. Then a year later, after heavy weather hit his area, we did a follow up story.

Now, 7 years later, there’s really no story to tell. The DaVinci roof keeps outperforming other roofs in his area.

“The Bellaforté Shake roofing looks as new as it did when we had it installed,” says Hollingsworth. “We are at complete ease during a southern storm. I sleep better at night knowing that the DaVinci roof is guarding our home and family.”