So you love the schools, the neighborhood and the yard, but when you pull up to your house, you don’t like the way it looks. But there are aspects of it that you do like, and you can’t bear the thought of tearing it down. Often a better solution is a major makeover. It’s hard to believe that some of these houses are remodels; in one case, even the tax assessor had to be convinced.Related: See More Exterior Makeovers 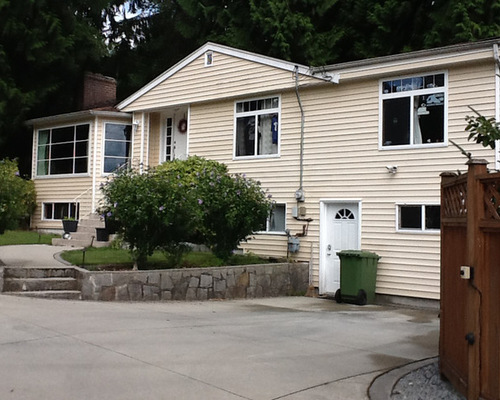 BEFORE: Not much about this facade made sense. An awkward pediment seems randomly placed. To the right, a garage had been finished into a room that threw off the proportions. And there’s an odd, unbalanced half-hexagon portion off to the left.

Due to setback requirements related to a nearby stream, a complete rebuild here was not an option. Instead, designer Susanne Doise worked with what she had and was able to add a small addition to this dated split-level home. 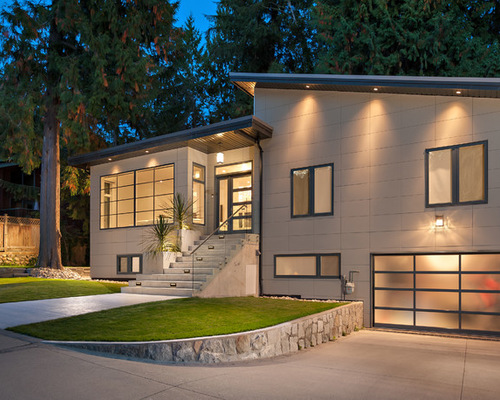 AFTER: At first, the clients thought they wanted a more traditional house, but once they saw the opportunities a more contemporary style offered, they were on board.

Working within tight setback restrictions, height restrictions and square footage maximums, Doise came up with a scheme for much more pleasing architecture. She designed a new roofline that incorporated a shed roof and a pop-up roof that allowed for higher ceilings and let more light inside. She squared off the awkward half-hexagon and brought back the garage, with an attractive frosted-glass-paneled garage-style door that’s a design asset. She replaced the vinyl siding with fiber cement panels The roof is corrugated metal. And new aluminum-clad windows let in loads of natural light.

She also gave the home inviting curb appeal thanks to a new concrete staircase with integrated planters and lights, a new glass-paneled front door with a generous sidelight and transom, and a new lighting scheme. 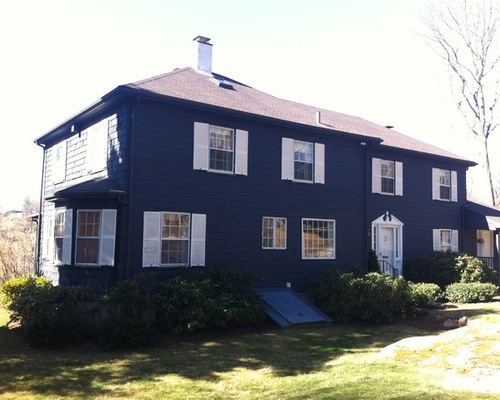 2. Suitable Style for a Former Foursquare

BEFORE: Originally an American Foursquare built in the 1800s, this home’s style had become a hodgepodge of confusing historical elements due to additions and renovations over the years. The architects at Carpenter & MacNeille knew that the Colonial touches were not in keeping with the more simple Craftsman homes in the area built during the era. 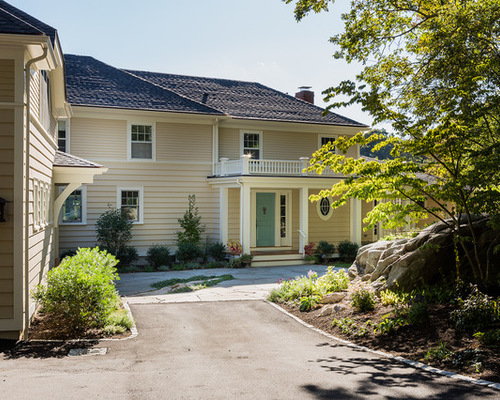 AFTER: The remodel included new siding that’s narrower on the second floor than on the first floor, a new patio that leads to the front door and a new front porch with a balustrade atop it. A new garage with a mudroom entry and game room over it was also part of the renovations.

The confusing Colonial details, such as the pediment and shutters that were added over the years, are history. “We jazzed up a simple house with great, period-appropriate architectural details,” interior designer Wendy LeStage Hodgson reported to Houzz contributor Mary Jo Bowling. 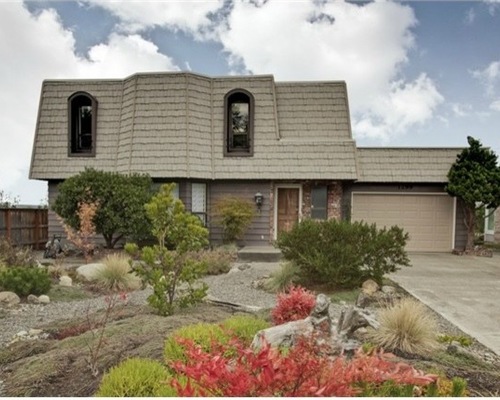 Before Photo, original photo on Houzz

3. Desperately in Need of Proper Proportions

BEFORE: This house with the giant mansard roof was notorious for being an ugly duckling along the beach on Camano Island, Washington. While the floor plan inside worked well, a lack of windows made the interior dark. 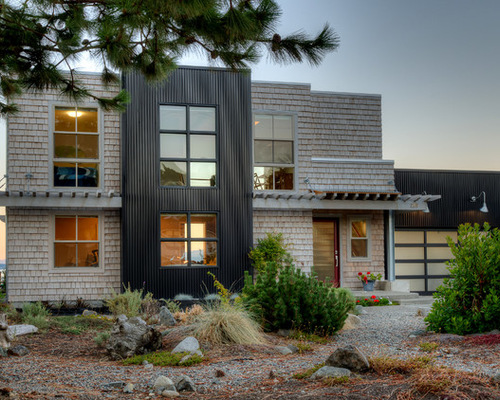 AFTER: Even the tax assessor had a hard time believing it was a remodel and not a tear-down situation, according to the architect, Dan Nelson. But the bulk of the renovations were a major exterior face-lift.

Before, the oversized mansard roof looked like it was pushing the house into the ground. Now, a new scheme that mixes corrugated charcoal-gray metal and Western red cedar shingles provides a pleasing balance. Boxing out the center and adding an arbor gave the house dimension. Large windows open up the facade and let in the light.

The front door is in the exact same spot but is highlighted by a new porch framed by an arbor. A modern garage door plays off the charcoal corrugated metal, and its panels play off the windows. 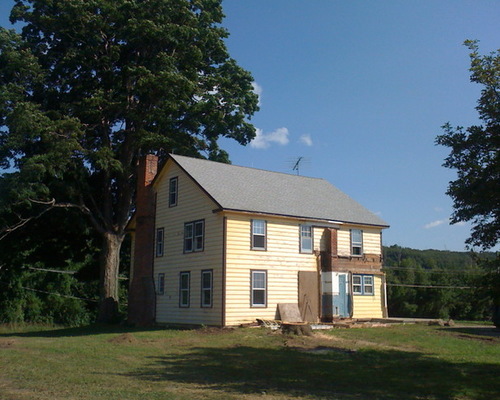 BEFORE: This historic farmhouse in Sharon, Connecticut, untouched since the 1940s, was in need of some love. The homeowners wanted to find buyers who would preserve the historic architecture. Interior designer Heide Hendricks and her husband, architect Rafe Churchill, were excited by the home’s potential and bought it for themselves. This is the back of the house; you can make out where an awkward addition had been removed. 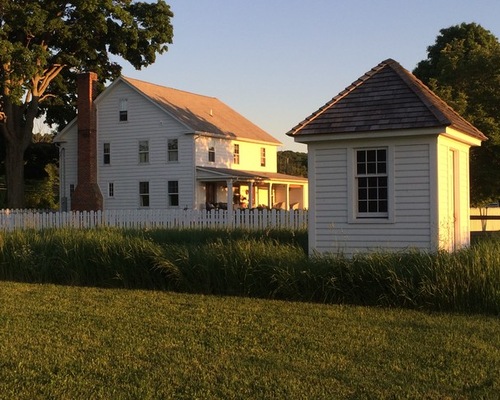 AFTER: As a historic restoration, this is not a radical change, but it’s still quite a surprise. The couple kept the footprint almost the same but added a back porch and mudroom where the addition had been, as well as a new shed and a new fence. 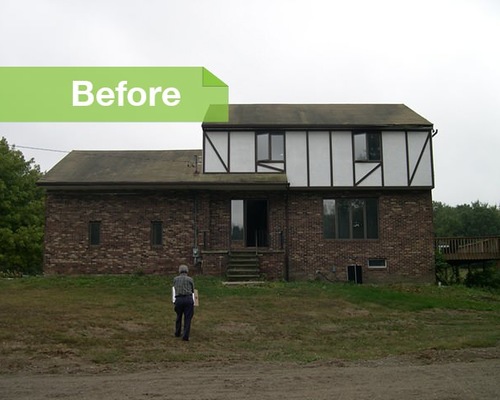 BEFORE: This next makeover is one of the most dramatic ones we’ve seen on Houzz. Architect Dave Beckwith transformed a 1970s mock Tudor to the Greek Revival style popular in Duchess County, New York. 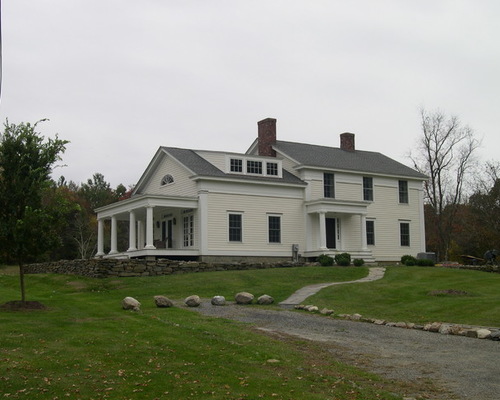 AFTER: Believe it or not, only porches and two 2-foot-wide additions along the front and back of the house expand the footprint of the home. The first floor was extended out to be flush with the overhangs you see in the “before” photos.

When you see the lovely setting around the house, you can see why the owners wanted to work with what they had. The home’s proportions, classical columns, windows, pronounced entablature and portico are all elements of Greek Revival style. 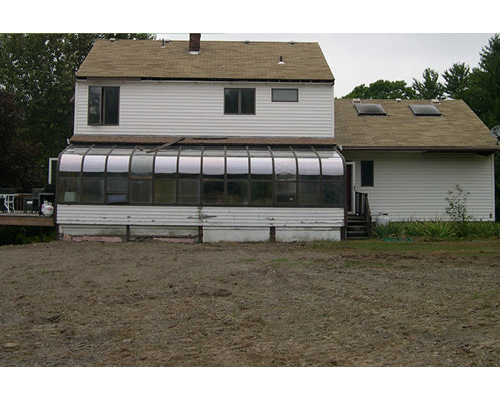 BEFORE: The back of the house lacked aesthetic appeal. 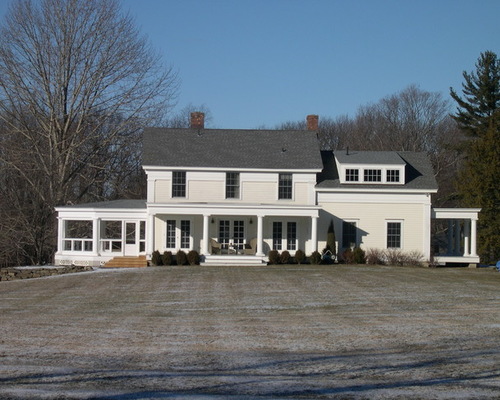 AFTER: Now, gracious porches on both sides and along the back add inviting style and provide plenty of comfortable covered space to enjoy the views.