What is a gambrel roof? Think of a shallow gable and a steep gable, then place the shallow atop the steep. Add dormers, often one long one, to the steep portion, and you have a configuration commonly referred to as Dutch colonial.

The gambrel structure allowed a wider roof span, which provided extra habitable space in the attic. This form evolved over several decades of adapting authentic 18th-century Dutch colonial architecture to the necessities of the time. Though simple gable roofs also sheltered some Dutch houses, the unique gambrel form became increasingly popular to the point of ethnic definition.

Limited to regions within and near New York's Hudson River Valley, colonial Dutch settlements eventually became outpaced by those of English colonists, who built their domestic architecture in Georgian and Adam styles. Dutch colonial houses we see today are actually revivals concurrent with colonial revival in general. Due to this, the gambrel roof has been shared and mixed across several styles, including shingle and Georgian. Conversely, classically inspired Georgian and Adam details often appear on Dutch colonial revival houses.

You cannot venture too far before coming upon a house like this one. Dutch colonial revivals inhabit neighborhoods from coast to coast. They show up frequently, being a specific type among the long-lived colonial revival era that stretched from around 1880 until around 1955.

Focus on the quaint entrance here. An elliptical arch punctures the classically referenced pediment supported by decorative brackets. Sidelights extend halfway down, implying a halved Dutch door. Other traditional elements include clapboard siding, double-hung windows with shutters, window boxes and a frieze above each lower-level window. The defining roofline breaks apart the two-story house, giving it an intimate and human scale.

Similar in scale and detail to the previous example, this home has a continuous shed dormer that's defined by the extension of the upper roof form and stretches across nearly the entire elevation. Unique here is the eyebrow porch cover, a detail found in many examples. It extends slightly forward of the adjoining eave and inconspicuously signals the entrance. Also notice the double-hung windows with a divided light sash on top and a single-pane sash on the lower half. This detail is also seen in shingle-style homes. 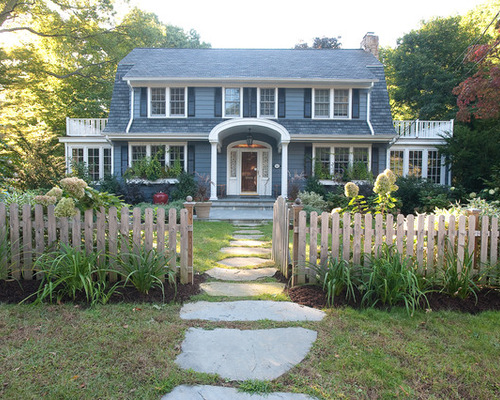 Moving up in size, this New York–area Dutch colonial revival maintains the inviting human scale inherent in this style. In true colonial revival fashion, windows are grouped into sets and sunrooms flank the lower levels. Significant here is the flare to the lowest eave line. This detail surfaced in original colonial designs; it was likely brought directly from the Netherlands. Notice how the shape of the front porch follows the fan light above the entrance door with sidelights and contrasts appropriately with the other linear elements.

Intersecting formations and other even more complex configurations show up in other styles, especially shingle. Consider the contrast in symmetry from the previous examples, and you can understand the association to shingle style. Substantial brackets support an attenuated flared eave that creates a front porch cover. 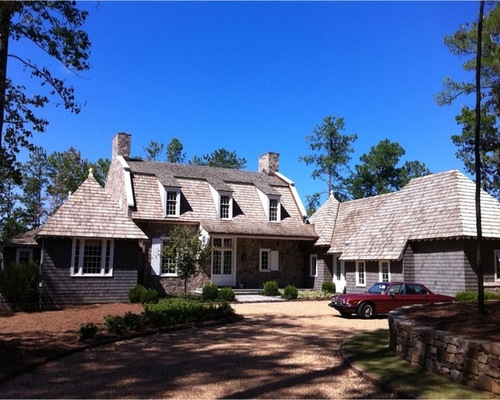 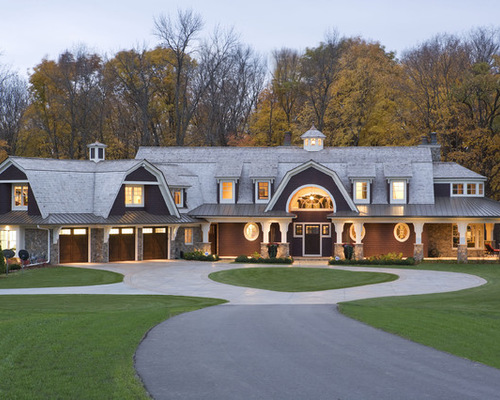 This comfortable new Minneapolis house has some contemporary twists on the gambrel roof theme. A large round arch set within a front-facing gambrel highlights the main entrance. The standing-seam metal roof of the wrapped porch and garage skirt contrast and emphasize the primary shingled portions of the roofs. Note the independent shed dormers and how the cross gambrel roof over the garage creates its own dormer impression. 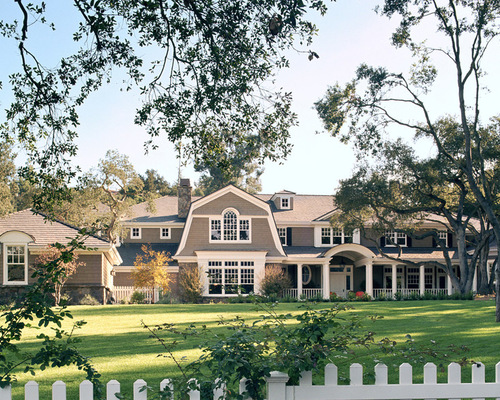 A gambrel roof establishes a focal point for this sprawling and elegant composition in Southern California. It has a complex balance of forms and elements blended unassumingly behind the gambrel. Notice the marvelously detailed lower-level triple window grouping happily topped by a Palladian window scheme, further emphasizing this focal point.

Whether modest or not so, the Dutch colonial gambrel roof shape has survived through several hundred years of American home-building fashions. The original gambrel provided extra habitable space, while contemporary versions are more flexible, offer greater visual interest and are a lovely homage to those pioneering Dutch colonists.