If you think snow guards are a new idea, then think again.

Some folks believe different forms of snow guards have been in place for more than 300 years. Consider stones and logs that were placed on roofs ages ago in high-snow areas like the Alps. They were put hauled up to the roofs and left on top to help increase friction and retention of the snow … and probably to help keep the roof on during high winds!

"Modern" snow guards started back in 1897 when Dr. M. Halliday invented and started selling snow guards for slate tile roofs and slanting roofs in New York City. One of his company's first snow guard installation projects was on the historic Bellevue Hospital, which still stands today.

Regardless of how old snow guards are or where they were created, they're very much a part of our roofing lives, both in the United States and in Europe. Designed to break up falling snow as it melts and prevent "avalanches" of snow from sliding off roofs, snow guards come in many forms.

Pictured here are a variety of snow guards currently being used throughout Europe. You'll see everything from a line of metal "teeth" on the roof to the entire roof saturated with snow guards. 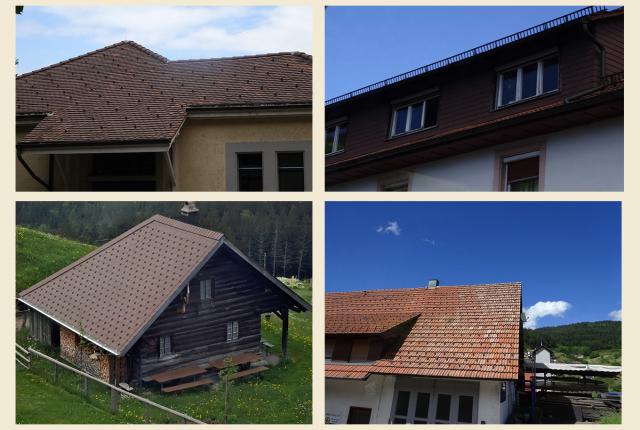 Whether you live in an older home in Germany or a modern home in Colorado, the experts at DaVinci Roofscapes recommend you remember that snow guards are essential for helping create a safe roofing situation. For more details see Q & A Guide to Snow Guards and What Are Snowguards and Why Are They Necessary?