Tornado Season – Is Your Home Ready?

On June 11, 2008 a F4 tornado ripped through the Manhattan, Kansas neighborhood of homeowner’s Jeff Lord and Karen Hudson.  The storm destroyed more than 40 homes in Manhattan that night, many of them in Lord and Hudson’s neighborhood. However, when they emerged from their basement after the storm, they were surprised to see no damage to their roof – despite the large tree lying on top of it!

“The insurance adjuster couldn’t believe that there was no damage whatsoever to our roof,” said Hudson. “It took him and his crew an entire morning to remove a big tree off the top of the garage, but the roof was completely intact. He was so impressed that he asked what kind of roof we had, because he wanted one for his house!”

Still intact was their DaVinci composite slate roof.  DaVinci Slate is wind certified to 110 mph, and is also Miami Dade approved when installed at a shorter exposure.  Choosing a designer roof with a high wind rating will improve your chances of coming out on top when Mother Nature comes calling. 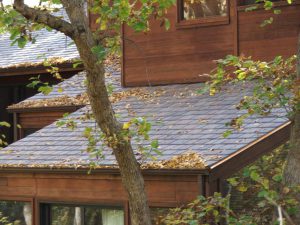 Picture taken after the storm – Garage