Whether you’re in Texas, Alabama or even Maine … these days you have to hold onto your hat. And your roof! That’s because strong blowing winds and severe weather are regularly cutting across the entire USA. The best solution? Invest in a high-wind resistant composite roof from DaVinci Roofscapes.

In Texas, Janice Barger’s DaVinci slate roof has protected her Country French style home since 2010. In just the last two years, her roof has stood up to a massive snowstorm, a nearby tornado and a huge wind storm.

“This roof has been put through the test,” says Barger, a Dallas homeowner. “In June of 2019 we had winds up to 75mph. Neighbors on both sides of my house had to get new roofs. My driveway, deck and sidewalk all were at least a half-inch thick with green limbs.

“Even though the entire neighborhood looked like a war zone, my DaVinci roof was intact. To say I’m pleased with the durability of this roof over the past decade is an understatement. It not only has the perfect aesthetic appeal for my home, but it also stands up to Mother Nature again and again!” 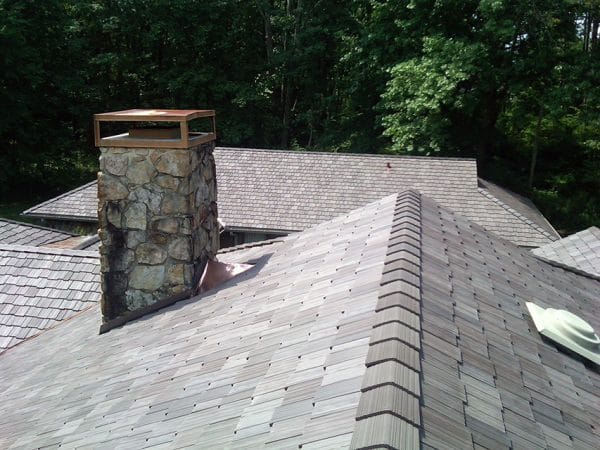 Nearby in Russellville, Alabama, the Gapultos also know about dealing with Mother Nature. An EF tornado came through the town 12 miles away and demolished the school building. With incredible winds, the entire area hunkered down. On March 3, 2019, 41 tornados went through Alabama in six hours. Still the Gapultos were calm.

For the past decade, the Alabama homeowners haven’t worried as much about storms. That’s because they invested in a DaVinci composite shake roof back in 2010.

“We have a storm shelter in our home,” says Margarita Gapultos. “Before the DaVinci roof, we’d head there right away when there was a storm warning. Now we feel safer with the DaVinci roof overhead. We’re still careful during storms, but we have this added sense of security that comes with knowing this roof can really stand up to heavy winds.”

Two years ago, when a tornado came right through her area, Gapultos said her roof was truly put to the test.

“A few shingles were blown out with the really bad winds, but there was no damage to the home,” says Gapulutos. “So many people in the area had roof damage. I know my previous cedar shakes would not have held up. The DaVinci tiles give us confidence during any storm.” 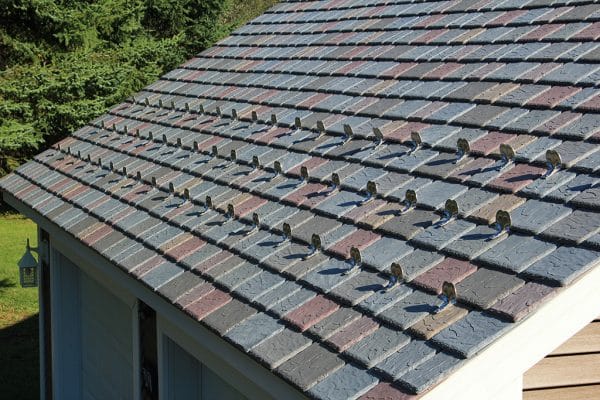 Up in northern Maine, it’s not the wind so much as the winter weather that tests the 11-year-old composite roof on Rob Fanjoy’s home. The DaVinci Multi-Width Slate roof has held up winter-after-winter as snow, rain and ice have repeatedly tormented the composite slate roof.

“It’s the cycle of harsh weather that tests this roof,” says Fanjoy. “First there’s snow. Then there’s rain and ice. Then melting. Then immediately more snow. That’s a great amount of freeze-thaw cycling going on. There was one winter we had five feet of snow. However, this roof just takes it and asks for more!”

According to Fanjoy, despite Mother Nature’s best efforts, the durability and look of the Vineyard-colored roof continues to surprise him.

“Even now, more than a decade later, visitors and delivery people STILL comment on the roof,” says Fanjoy. “Being in the northeast, where natural slate is mined, they can’t believe they’re looking at a composite roof.

“This was one of the smartest investments we made after purchasing our home. The DaVinci roof easily handles all our winter weather, plus the high winds we occasionally get in this rural area. We’re grateful for the authentic look of the roof plus its incredible durability.”