The father-and-son team of Jeff and Mike Stimpson love a good remodeling project. Their family-owned company, Jeff Stimpson Contracting Corp., specializes in fulfilling customer’s dreams. And that’s exactly what they did for Doug and Shanan Miller. 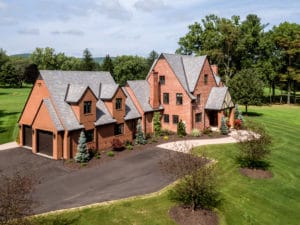 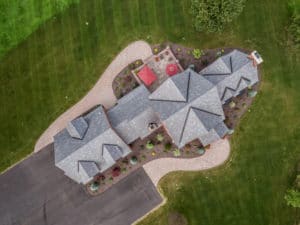 “The Miller’s home was built in 1930,” says Mike Stimpson. “We were hired to do an entire house remodel that included changes in the floor systems, windows, doors, HVAC, plumbing, electrical and the roof. These homeowners value quality workmanship and products. They wanted to update and upgrade their 6,000-square-foot home while still preserving the historic nature of the property.”

The old slate roof on the Tudor-style home was leaking into the house when the renovation began.  “We felt it was best to remove all the slate instead of repairing it due to its poor shape,” says Stimpson. “Plus it was a tremendous amount of weight on the roof framing.”

The search was on to find a new roof. Working together, the homeowners and contractors selected DaVinci Roofscapes Multi-Width Slate in Aberdeen featuring a blend of five colors: Dark Gray, Light Brown, Dark Purple, Green Stone and Dark Stone. 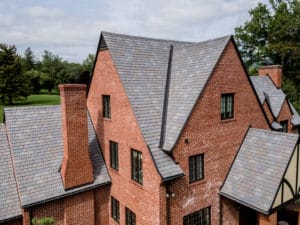 “The DaVinci composite slate shingles were chosen for a number of reasons,” says Stimpson. “First of all, the quality of the product. Second, the appearance. We felt this simulated slate shingle closely matched the original slate roof.”

According to homeowner Doug Miller, the DaVinci product exceeded their expectations. “It was very important to us to have a roofing product that resembled the original slate on the home when we purchased it,” says Miller. “We wanted to keep the look and character of the house the same. We’re very pleased with the appearance of the simulated slate shingles. The color blend we selected has nicely accented the color of the home’s brick siding and helped pull the entire exterior renovation together.”