More than 330 years after being founded, Philadelphia’s William Penn Charter School recently added a transformational building to its campus. The Graham Athletic & Wellness Center, which opened in 2021, amplifies athletics and wellness at the oldest Quaker school in the world. From a rock climbing wall to a wrestling room, the 88,000-square-foot structure was envisioned as a hub. A special space where the school community can gather to work out, watch a game, or simply spend some downtime in light-filled spaces.

How did the school’s Board of Trustees and administrators ensure the new structure fit in with the historic campus? They worked with EwingCole on the design. And, when it came time to select a roof, they chose the authentic look of composite slate using DaVinci Single-Width Slate shingles.

“Penn Charter’s current campus in the East Falls neighborhood of Philadelphia was founded in the 1920s,” says Ansley Cox, director of facilities at William Penn Charter School. “We have a number of historic buildings constructed of Wissahickon schist, which is a sediment original to this region, and featuring slate roofs. The DaVinci product was used to construct a roof that continues the tradition, but was also cost effective.” 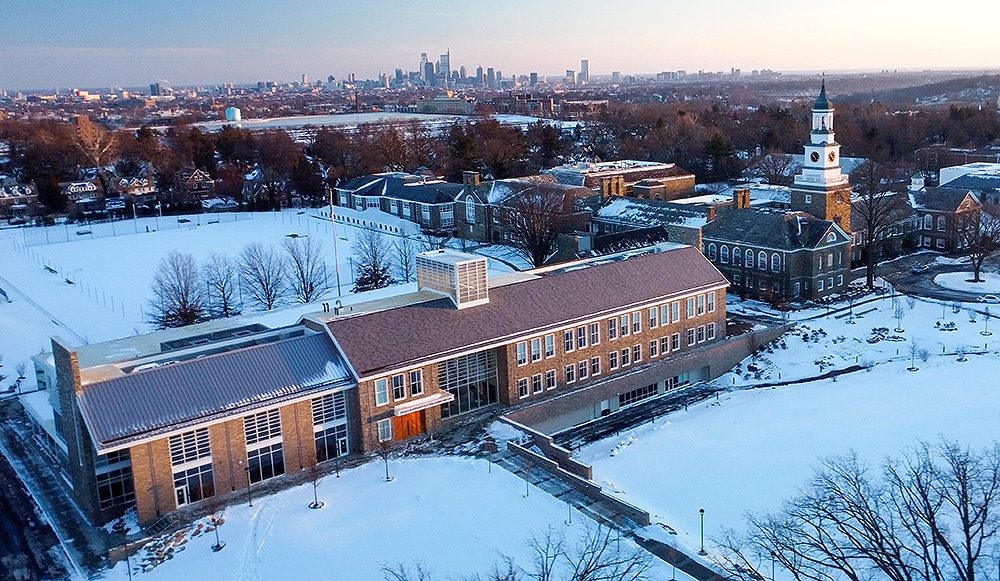 “We were trying to blend the new roof to match our existing roofs on campus,” says Cox. “We were not seeking an exact match. Instead we wanted colors that complement the current roofs. DaVinci offers enough colors options that we were easily able to achieve this goal.”

Cox coordinated the work with the architects and contractors on the overall project. It is part of a campus transformation that will soon include a new lower school.

Within the building are two competition basketball courts, a bi-level fitness center, and an athletic training suite. There’s also a nutrition center, meeting and classroom spaces, and locker rooms. For the installation of roofing atop the building, Cox worked with the team at Robert Ganter Contractors.

Almost 1,000 students, from pre-K through 12th grade, attend the college preparatory school. Founded in 1689 by William Penn, the school has been in continuous operation for more than 330 years.

“Things have changed a great deal during the past several centuries,” says Cox. “For example, I doubt William Penn considered long-term roofing care when the school’s first buildings were constructed. However, one of the features we find most appealing about the DaVinci roof is its low maintenance.

“We’re growing the school with technological advancements. At the same time, we remain committed to the original principles of its founder.”