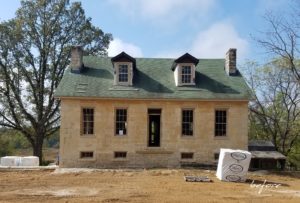 You may wish to make your reservations soon for the newly-renovated General Sherman’s Inn in Bloomsdale, Missouri. The beautifully-renovated 1860s home features antiques and period furniture inside, and a synthetic shake roof outside.

“I love old houses and antiques, so this has been a true labor of love,” says Lance Sago, owner of the three-bedroom bed and breakfast facility. “This house is an original structure on my farm. I’m only the second owner of the house. It was owned by a German immigrant, Christian Funk, who constructed the home. I purchased the house from the Funk trust. I just knew when I bought the surrounding farm 25 years ago that I wanted to renovate the house and share it with others.”

To prepare the structure for guests, Sago had to fully replace the electric, water, sewer and HVAC systems for the house. The interior plaster, in terrible condition, also had to be fixed.

“The exterior wall of stone is 17-inches thick,” says Sago. “They were plastered over on the inside with new insulation and then drywall.” 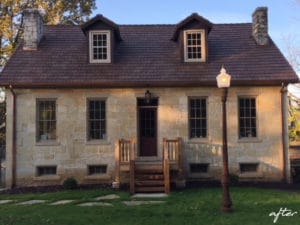 ack in the 1860s wood cedar shingles topped the home. A renter covered the roof with green asphalt shingles in later years.

“I wanted to bring the roof back to the original cedar look, but without the maintenance hassles,” says Sago. “During my online search I found the DaVinci Roofscapes synthetic shake tiles. They looked so authentic and offered freedom from long-term replacement worries so we made the investment.”

Sago had Bellaforté Shake tiles in an Autumn blend installed this past year on the stone home that sits on 100 acres.

“Initially I thought the cost of the synthetic shakes were expensive,” says Sago. “However, then I gained more information and understood that the life cycle for DaVinci shakes is very long compared to typical shingles.

This was an investment in the future of this historic home. I feel the aesthetics are important for this building and I like the idea that the roof will last long after I’m gone.”

Built in the 1860 to 1870 time frame by Christian Funk, the new bed and breakfast is located 10 minutes south of Festus, Missouri.

Sago purchased the home in 2014, but he had previously owned the ground and farm surrounding the home for 23 years.

“I believe this will best serve a family or small group of friends as a rental property,” says Sago. “There’s great history and relaxing features here at the B&B. Now I’m grateful that there’s a dependable synthetic shake roof overhead that will help protect this historic home for many decades into the future.”