“You’ve got to imagine this house has had a good number of roofs in the past 230+ years,” says homeowner Mike Tabasso. “We hope the new DaVinci roof will add to our home’s history.”

The Tabasso’s home does indeed have a great deal of history. A previous owner has related that the house was used as a Civil War field hospital. It’s also rumored to have been a stop on the famed Underground Railroad.

Built to resemble a European Farmhouse, the previous owner/designer was a Hungarian stone mason. He substantially expanded and renovated the home in 2012, keeping the authentic look.

“The previous roof on our home was a synthetic slate that was failing badly,” says Tabasso. “It was brittle and breaking up. The final straw was a storm in June of 2020 that rolled through causing severe damage. We knew it was time for a roof replacement. We wanted to honor the history of the house by selecting a composite slate product that had a realistic appearance.” 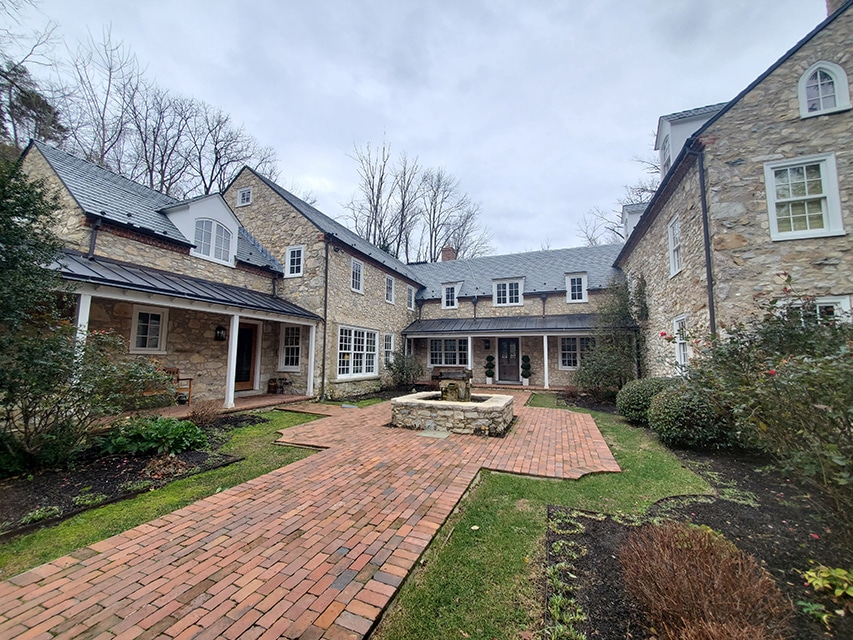 Searching for the Right Color

Ready to invest in their new roof, the Tabassos contacted Fisher Brothers Exteriors.

“We told Mike and Melissa that DaVinci Roofscapes would be the only product with a level of quality and appearance to match their beautiful home,” says Lee Fisher with Fisher Brothers Exteriors, Inc. “This is a tricky roof application because it’s in a European style, which we’d never done before. The roof has a graduated width appearance that’s tricky to achieve.”

To gain approval on the pattern, and on the color, Fisher laid out samples of DaVinci Multi-Width Slate tiles at the Tabasso residence. Once the design pattern was confirmed, it was then on to the color determination.

“The color choice was tricky,” says Fisher. “We were trying to get close to the previous color, which is weathered green/gray. The final choice was a Dark Green that we pulled out of a DaVinci color blend and then custom ordered.”

According to Fisher, the key to the color selection was showcasing how the different colors would look on the roof. So, he got samples from DaVinci and started a color board — up on the roof!

“I nailed up 4’ x 4’ areas on the roof, each with different colors,” says Fisher. “This way the homeowners could see the colors at different times of the day. In the end, the Dark Green definitely won out.”

What the Tabassos estimated would be a six-week installation project was completed in just five weeks.

“The crew was fantastic,” says Tabasso. “They really respected our property and this project. This was not an easy installation because of the style of the tile placements. They paid special attention to every detail. We appreciated them so much that we’ve recommended them to others.”

With the new roof in place, the historic house looks like a show home.

“We absolutely love the new roof,” says Tabasso. “The home is so striking as you pull up. You immediately focus on the stonework and roof. The prior roof just didn’t do this house justice. This DaVinci roof perfectly achieves that goal.”