August 10, 2020 is a date Iowans will remember for a long time. That’s when a powerful derecho (a long duration straight line wind event) raced through their state. For Iowa residents, it was equivalent to experiencing a Category 4 hurricane. Or an EF-2 tornado.

In Vinton, Iowa, wind gusts rose to 130 mph. For about 45 minutes Carol and Ray Knoff’s Victorian-style home got the full brunt of the storm. Hail, sustained high winds and rain pelted their 119-year-old house.

A Sigh of Relief 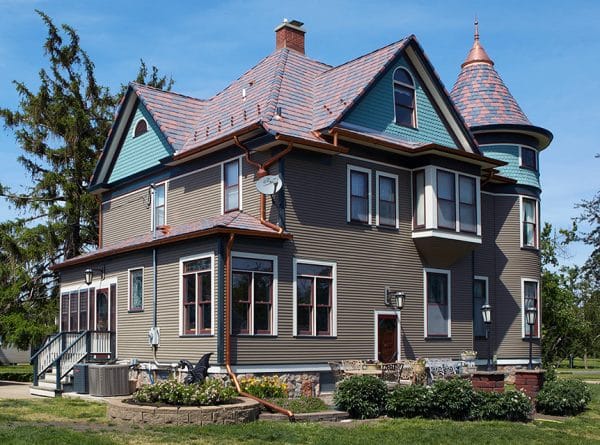 “This was unlike any storm we’d ever had in our area,” says homeowner Ray Knoff. “The derecho was really unexpected, so people didn’t have too much time to react. We stayed in the basement for most of the storm.”

After the derecho, the Knoffs went outside. They quickly discovered a section of a maple tree downed by the storm. Some lawn furniture was blown around and damaged, as was a telephone junction box. However, after sustained winds of more than 100 mph, the composite roof was intact.

Unfortunately, some neighbors lost shingles or parts of their roof. Big branches were down throughout the neighborhood. In addition, trees were toppled.

“This was so different than other storms we experience,” says Knoff. “With the derecho, there are sustained winds over an extended period of time. They’re power storms produced by long-lived thunderstorm complexes that produce bow echoes. It happens so quickly that there’s really little way to give the public advance warning.”

The Knoffs selected their DaVinci roof in 2012. At that time, the durability of the composite slate tiles was a “must have” since they had just experienced a major wind storm. Their second desire was to find the right color roof tiles for their historic home.

They chose a custom blend of gray and red to replicate the home’s original roof. Bellaforté Slate tiles were used on the majority of the roof. However, on the complex cone-shaped turret, their roofer installed DaVinci Multi-Width Slate tiles.

“The transition of the blended colors from red to gray gives a distinctive character to our home,” says Knoff. “It looks so unique. However, it’s also traditional as you would expect from a home this old. Above all, we’re impressed that, after nine years, the roof colors still look distinctive. They stand out very clearly.

“Our initials efforts to find the right roofing product were worth it. And now, we are experiencing even more benefits. This composite slate roof really held up to the derecho. That gives us confidence that the DaVinci roof can stand up to Mother Nature.”