LENEXA, KAN. – When Hurricane Harvey barreled into Texas on August 25, 2017, it made landfall as a Category 4 hurricane just six short miles away from the Mustang Island Episcopal Conference Center. Severe weather conditions caused 100 percent of the structures in nearby Port Aransas to sustain damage, and buildings at Mustang Island State Park were mostly destroyed. But not the conference center. Just months earlier it completed installation of impact-resistant DaVinci Roofscapes® composite tiles in mansard-style and rooftop applications on several structures at the oceanfront property.

“Wind speeds were between 120 and 140 mph when Harvey came ashore,” says Rob Watson, director of camps and conferences for Episcopal Diocese of West Texas. “We can’t say enough about the DaVinci product. Only a few shingles blew off during the storm and the conference center received little structural damage.

“When we originally researched the DaVinci roof we were told that it would stand up to hurricane conditions. I didn’t expect we’d have to test that claim so soon. I was pleasantly surprised that the tiles held their ground.”

The design firm of Richter Architects in Corpus Christi, Texas recommended the Single-Width Slate composite roof product to replace fiber cement products installed in 2002 when the center was first constructed. The composite tiles from DaVinci were specified for both side wall applications and roofs for buildings at the Mustang Island Episcopal Conference Center. 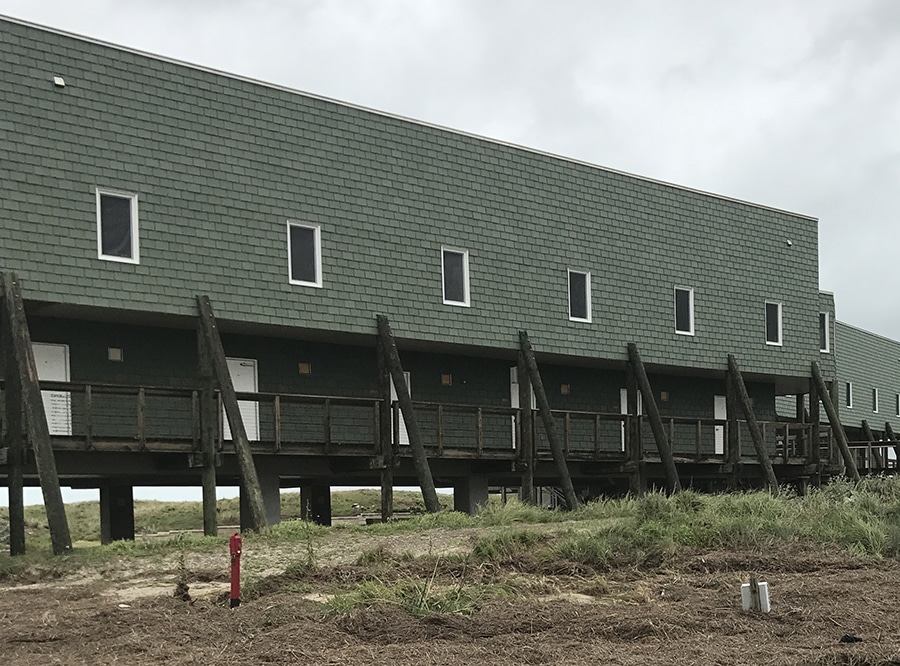 The impact-resistant roofing from DaVinci is approved by the Texas Department of Insurance and has Miami Dade Code approvals. Made of durable composite materials, the half-inch thick synthetic slate tiles resist curling, cracking, fading, mold, algae, fungus and insects, plus salt air and sea spray.

The custom-color Mustang Moss polymer tiles were installed on structures housing 24 guest rooms at the conference center. The unusual straight mansard application allows the tiles to serve as both roofing and siding material.

According to Watson, minimal damage was sustained at the expansive beachfront property. “We experienced a flood surge from the bay on the western side of our property causing the water to rise from one to four feet across the complex,” says Watson. “We’re fortunate that the conference center itself received little structural damage. We lost three windows, a few tiles and had minor water penetration. No water entered the guest rooms at all.

“Of course there was debris everywhere and we were without power and water for three weeks. But that’s so minimal compared to the total devastation we’ve learned of in communities very close to us. We’re thankful that the DaVinci product, which we’ve found to be both attractive and durable, helped protect our structures.”

The long recovery for Texas towns is already underway. However, while others are rebuilding, the conference center team has an eye to the future with additional building projects.

“We’re looking to add two more housing units, a welcome center and a great room at the conference center,” says Watson. “There’s no doubt we’ll use DaVinci products to clad all the new buildings. This product has proven itself during some of the worst weather conditions imaginable. We know we can rely on DaVinci products and we plan to do so repeatedly in the future.”