The Midwest gets a lot of severe weather. However, since having DaVinci Multi-Width Slate roofs installed more than 10 years ago, some residents of Edmond, Oklahoma no longer worry about storm threats.

“Oklahoma is ‘Storm Central,’ but we really don’t pay as much attention as we used to because we don’t worry about our roof,” says homeowner Chuck Musgrave. “I never get concerned when the weather forecast calls for hail. Our DaVinci composite slate roof has proven itself over and over again.”

Around the corner, homeowner Terri Underhill is similarly pleased with her DaVinci roof.

“We’ve had no issues at all,” says Underhill. “Our roof has been wonderful. Even when major ice storms came through in 2020 we lost big trees and limbs. They damaged the guttering, our A/C unit and totaled the car. Parts of the tree landed on the roof. However, our shingles were unscathed.” 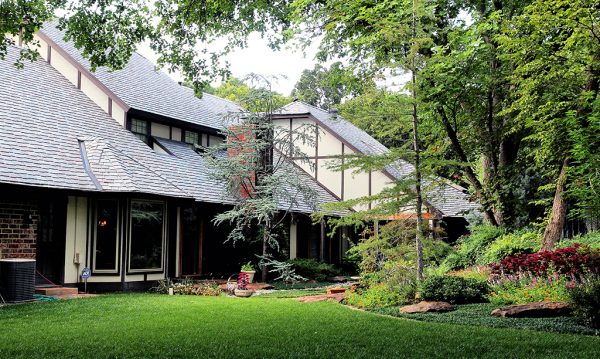 Originally the Musgraves and Underhills both invested in composite roofing to gain realistic slate roofing on their homes. In “A Tale of Two Roofs” both homeowners explained how they chose DaVinci products for their authenticity. Now, more than a decade later, they’re still pleased with the looks of their roofs. Above all though, they’re singing the praises of its durability.

“We’ve had several storms with VERY high winds,” says Musgrave. “The DaVinci roof makes us feel secure. We’ve only gone to our storm shelter twice in the last decade. The winds don’t phase this roof.”

DaVinci roofing products are certified to withstand winds up to 110mph. In addition, the composite tiles are Class 4 impact and Class A fire rated. All DaVinci roofs have a Lifetime Limited Material Warranty to provide long-term peace-of-mind to homeowners.

Roof Lives Up to Its Promise

For the Underhills, who live in a wooded area, tree limbs are a major concern when strong winds hit.

“We’ve had severe weather almost every year since we got the DaVinci roof,” says Underhill. “In 2011 a tornado hit the backyards of houses across the street from us. Most neighbors had roof damage — except us.

“We’ve experienced winds up to 70mph with hail that spans two inches in diameter. Back-to-back ice storms truly ruined our forest area. There have been branches on our roof on four different occasions. However, we’ve never lost a roofing shingle. This roof has lived up to its promise.

“I’m really glad we originally saw the DaVinci roof on the Musgrave’s home. Because of them we made one of the smartest investments possible for our own house.”

Cutting Insurance Rates in Half

In many areas of the country, investing in DaVinci roofing products brings discounts on homeowners insurance. These long-term discounts can add up for homeowners. They have for the Musgraves.

“Last year our insurance rates went up considerably,” says Musgrave. “When I asked the agent why the big jump, he said it was because companies were raising rates to account for potential roof damage from being located in Oklahoma.

“I explained about the durability of our DaVinci roof and asked him to take another look at our rates. Turns out someone had entered the wrong age of our roof. And, they had listed it as a ‘standard’ roof. I sent them our DaVinci documents. The insurance company immediately lowered our policy rate from $11,200 to $6,359. That’s almost a 50% savings!

“Great look, solid performance, money saved. After more than 10 years, I am still plenty pleased with this DaVinci roof!