Like the icing on a wedding cake, the new Fancy Shake roof from DaVinci on Bud Bell’s Victorian home adds sweetness to his house.

Built in 1903, this Victorian beauty has a story to tell. It was originally constructed in downtown Los Angeles for a wealthy merchant. Over time, the house deteriorated, but it was saved from certain demolition in 1983 by Bud and Christine Bell.

“We decided to move the house to Manhattan Beach,” says Bud Bell. “That’s about 20 miles from where it was built.”

To accomplish the move, the roof had to be taken off the house. Then the home was cut in several pieces and transported during a lengthy and difficult move. Once at its new location on Third Street in Manhattan Beach, the house was reassembled.

After the move, the Bells wanted to keep the home as original as possible. To achieve that, they immediately installed sawed cedar roofs. However, 30 years of weather exposure caused the shingles to fail. Plus, the homeowners were concerned about the fire hazard posed by the real cedar roof. In 2017 the shingles were deteriorating so badly that the roof leaked. 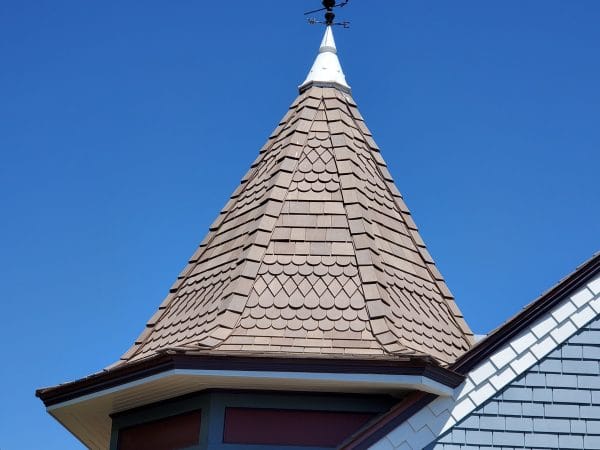 “I searched online for the best options that would preserve the original look of the roof,” says Bell. “That desire ruled out most standard roofing materials.

“All of the composite materials I looked at had bad reputations. Except for DaVinci Roofscapes. Everyone told us that DaVinci was the best composite shingle available.”

Bell traveled to the DaVinci manufacturing headquarters in Lenexa, Kansas. There he discussed his roofing project with the customer service team. While there, they spoke about his needs for synthetic shingles that are a mixture of straight cut, diamond point, and beaver tail to replicate the original Victorian-style roof.

“This project was unusual for us,” says Sandra Clark with Anderson, Knox & Clark, Inc. “The historic Victorian style of this home is not common for the coastal community of Manhattan Beach. We’ve installed DaVinci roofs for about 11 years, so we jumped at the chance to tackle this ornate roofing project.”

Icing on the House 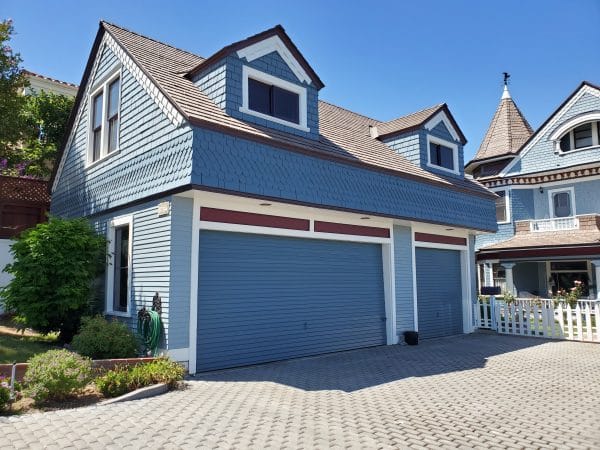 This was the first time the team at Anderson, Knox & Clark, Inc. installed DaVinci beaver tail and diamond point shakes — and they did a terrific job.

“We spent two months working on the exacting placement of each shake,” says Clark. “Replicating the original roofing details was a rewarding challenge.

“First we photographed the original roof. Then we worked on recreating every single detail.”

With the ornate room once again on the house, the Bells are once more the talk of the neighborhood.

“Carl Clark and his crew did outstanding work on the re-roofing project,” says Bell. “The process was very well planned and executed. His roofers are real professionals. I believe we got the best roof possible and I definitely would recommend his services to others.

“The roofing team, and the DaVinci product, gave us exactly what we wanted … a fully-restored, beautiful Victorian home.”