Kim Stevens is passionate about the details of her home in Saratoga Springs, New York. Built in 1914, the Arts and Crafts style bungalow is a standout in her historical neighborhood. So, when her roof started leaking she knew it was time to make a bold move.

“The previous owner took off the original slate roof about 10 years ago,” says Stevens. “It was leaking. They replaced it with an architectural shingle that just didn’t last. It also leaked.”

It’s been a long process for Stevens to find the right roofing solution for her home. Her dream was to transform the home exterior back to its original slate and copper look. However, she needed approval of the local Design Review Commission (DRC) on any new roofing product she selected.

Stevens got lucky in two unique ways. First, she met roofer John Burgart. He is a metal roofing expert. In addition, he’s installed DaVinci Roofscapes synthetic slate in the past. Second, when she called DaVinci for product information, she was linked up with project specialist Ashley Cisetti.

While Cisetti resides in Kansas, she had been staying in Saratoga Springs with family when the call came in from Stevens. They met and Cisetti laid out various DaVinci roofing options on the front lawn. From that meeting Stevens chose the DaVinci Single-Width Slate tiles in a Castle Gray color. And, to accent her roof, Stevens decided to have Burgart install stunning copper accents. 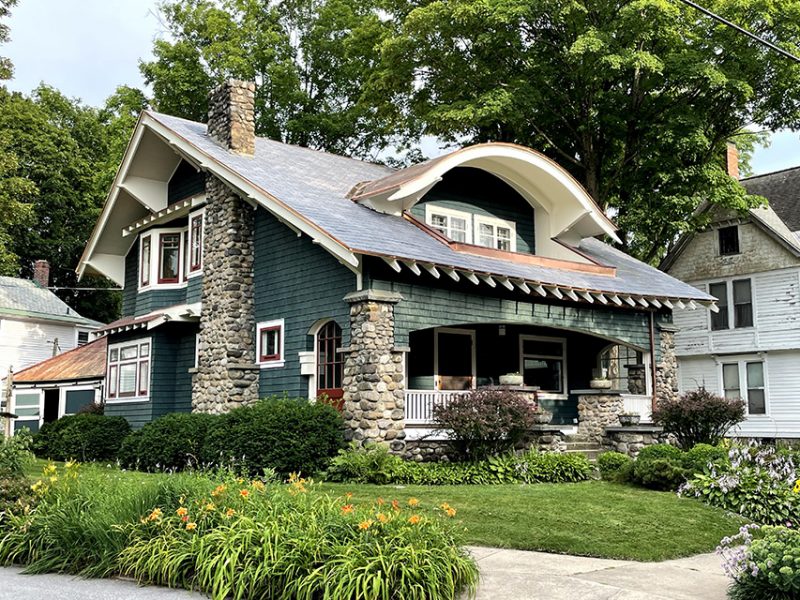 With the product decisions made, Stevens next sought the approval of the Saratoga Springs DRC.

“The DRC gave me the option to replace the current roof with a similar architectural shingle,” says Stevens. “However, I wanted to take the opportunity to put on something similar to the original slate. I love the look of slate, and this house really deserves that historical appearance.”

As a result, Stevens made a detailed presentation to the DRC lobbying for the DaVinci product. Cisetti attended to lend support and answer questions. The result? The green light to proceed with the city’s first synthetic slate roof in a historical district.

“I can’t say enough about how great Ashley has been with this project,” says Stevens. “Right from the start she enthusiastically jumped in. She came in with samples and provided resources. The she gave me homes to visit with DaVinci roofing. She truly saw the entire project through from start to finish. That’s incredible customer service.”

With approvals from the DRC in hand, Stevens had her roofer order both the DaVinci product and copper materials needed.

“This is a stunning historical project,” says Burgart with North Country Metal Works LLC. “I enjoy working with the composite roofing. While we mostly install metal roofs, I have used DaVinci on several projects in the past. This includes my brother’s home 12 years ago. To this day, that job looks fantastic.”

Equally impressive is Steven’s new roof. There are bended custom drip edges, a valley and a traditional half-round ridge cap all in copper. The rounded dormer in the front of the house consists of a flat-laid copper panel fabricated by Burgart’s team. After that, there is also a half-round copper gutter with a copper conductor and a rain chain.

“I simply love my roofer,” says Stevens. “This was a multi-year project. He was terrific every step of the way and I can’t recommend him highly enough.

“The finished roof is beautiful. I think it’s as close as we could get to the quarry slate originally on the house. I did a great deal of research on this project and it all paid off. This house once again has proudly taken its spot as a historical landmark in our community.”