LENEXA, KAN. –Rutherfurd Hall in Allamuchy Township, N.J. has quite a history. Designed by famed New York architect Whitney Warren (whose company designed Grand Central Terminal in New York City) and landscaped by the Olmsted Brothers (sons of Frederick Law Olmstead) the massive Tudor-style home was constructed in 1904 for the Rutherfurd family. After changing ownership in the 1950s, the structure was used as a residence and nursing home for nuns, and was sold 10 years ago to the local Board of Education, which now operates it as a cultural center and museum.

Listed on both the New Jersey and National Register of Historic Places, Rutherfurd Hall boasts 18,000-square-feet of space on three levels. During its initial years, the expansive estate had more than 6,000 acres and hosted many dignitaries, including President Franklin D. Roosevelt, European royalty and titans of industry. 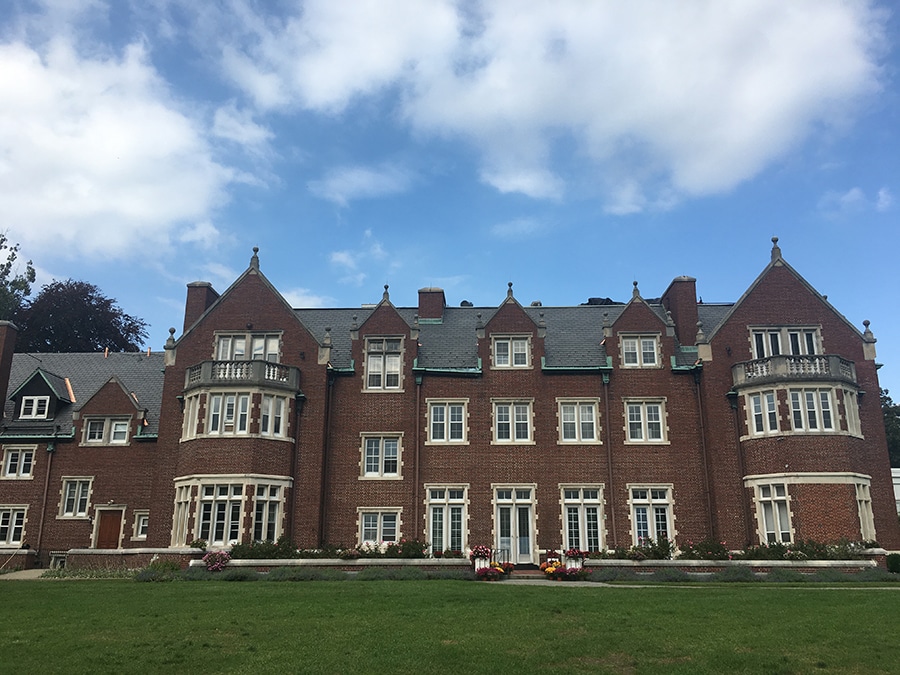 “We’re fortunate to now be the ‘keepers’ of this historical jewel,” says Laurie Rapisardi, executive director of Rutherfurd Hall. “Through ongoing preservation and conservation efforts we have the means to tell many valuable historical stories about citizens of New Jersey and their associates in the first half of the 20th century.”

To safeguard the building’s historical integrity and to better accommodate its future role in the community, the operators of Rutherfurd Hall brought in Michael Calafati Architect, LLC (MCA) in 2014 to create a Preservation Plan. One of the projects involved researching and recommending a new roof for the structure.

“Originally the house had a majestic slate roof,” says Michael Calafati, AIA, LEED AP. “Around 1950, the home was sold by the Rutherfurd family to the Sisters of Charity to use as a residence and nursing home for nuns. The slate roof was removed during the first few decades of ownership by the nuns and replaced with an asphalt roof.

“When we took on this project, it was clear that the aging asphalt roof was living on borrowed time and needed immediate attention. We wanted to restore the grandeur of the original home, but we knew the weight of real slate would not work. After doing some research, we discovered the ideal solution in a Single-Width Slate composite roof from DaVinci Roofscapes. We found that the faux slate was the next best option to real slate and truly helps preserve the architectural integrity of the building.”

The new synthetic slate roof topping Rutherfurd Hall is a Smokey Gray color to complement the rest of the structure. Installed by Alper Enterprises, Inc., the new roof provides beauty and security for the structure, which hosts dozens of weddings and special events yearly.

“The new DaVinci roof looks simply amazing,” says Rapisardi. “The roof appears more as it once did when the home was built in 1904. Seeing the project complete, we’re thrilled with our decision to invest in this composite slate roof.”

According to Rapisardi, the DaVinci product “checks off all the boxes” for what the historical structure needed in a new roof. “This product is very realistic and has exceeded our expectations,” says Rapisardi. “Since our historical building is three stories high, it’s very important to us that the roof is not only dependable but easy to care for while looking historically correct. We feel that the DaVinci roof fulfills all of these aspects.”