The snow was barely off the ground in late March when Kansas City had its first hail storm of the year. Fortunately for David and Libby Shinn, their new single-width Shake roof was ready for the challenge.

“This was the largest irregular hail I’ve seen locally,” said David Shinn, a Kansas City, Mo. homeowner. “It was jagged and the size of a quarter, which would have damaged my previous roof. 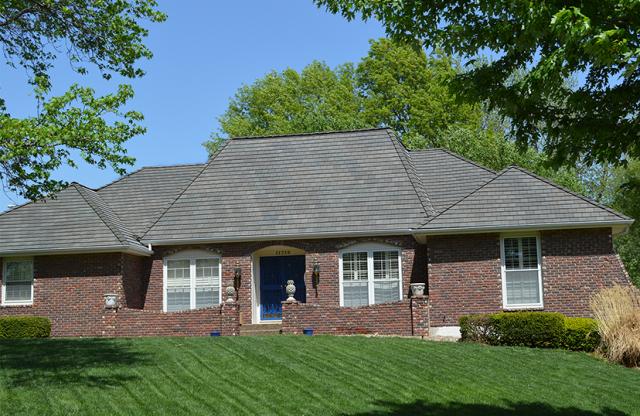 “My expectations for our new DaVinci Roofscapes composite shake roof are very high, so I was extremely pleased when our roofer came out after the storm, inspected our roof and reported we had no damage at all.”

This is the second roof the Shinns have had installed on their two-story home since it was built in 1975. The first natural cedar shingle roof had to be replaced due to hail damage, and the second cedar roof drew the uninvited attention of raccoons, silverfish and squirrels.

“I did a great deal of research on this shake alternative roof before I purchased it,” says Shinn. “Friends recommended DaVinci so I looked at homes where it was installed and liked what I saw. Then I decided that at my age I didn’t want to have to worry about roof problems ever again and it was time to select a shake roof alternative product. All of that combined led me to purchase the single-width Shake roof, which has turned out to be a very smart choice.”

As a bonus to his decision to invest in an impact-resistant roof, Shinn reports that his annual homeowner insurance premiums from Farmers Insurance Exchange have dropped by more than $1,000. Plus, his roof no longer hosts the unwanted visits of neighborhood animals!