“My real cedar roof was deteriorating due to age, sunlight exposure and our weather conditions,” says Franey, a homeowner in Salt Spring Island in British Columbia. “We’re right on the Salish Sea here so we get a good amount of salt air on our homes. Plus, we have very rainy weather throughout the winter months, so our roofs need to handle some extreme conditions.” 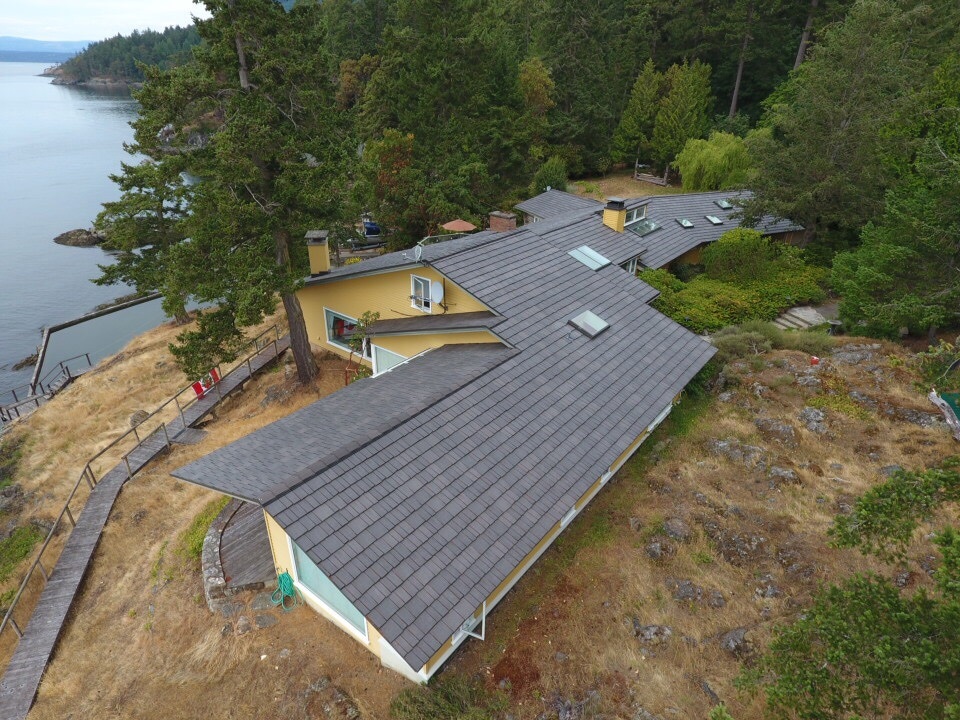 Often described as the “jewel of the Southern Gulf Islands,” Salt Spring Island is nestled against the east side of Vancouver Island. The island boasts more than 10,000 residents, plus several thousand sheep and a sizeable deer population.

“I’ve owned this home for 23 years and love the area,” says Franey. “During my time here I’ve added on and enlarged the property to where it’s now a 5,500-square-foot structure. With the overhangs and soffits, the total area of the new Bellaforté Shakesynthetic shake roof is about 8,800 square feet.”

The team at Custom Roofing was up for the task of reroofing Franey’s sprawling homestead. After all, they handled the re-roofing of his neighbor’s home and several others on the island. In just the past four years the crew has installed 16 DaVinci roofs in the area.

“The house near Basil’s was the first DaVinci installation we did back in September of 2014,” says Caleb Friesen, owner and president of Custom Roofing. “Since that time synthetic shake roofing has grown dramatically in popularity in this area.

“The ability of DaVinci roofing to withstand our challenging weather conditions makes it a winner for homeowners here in British Columbia.

“The longevity, appearance and low maintenance aspects of the DaVinci roofing product are all features desired by homeowners. There’s not a month that goes by when we’re not asked by a potential customer about the features and benefits of synthetic shake roofing. We’re happy to point them to the many success stories in the area — including Basil’s beautiful new roof!”