Since 1908, Muir Woods in California has been federally protected as a National Monument. But, how do you protect the roof over its famous visitor’s center? Real cedar shakes invite extensive algae and moss growth. Moisture ruins the shakes, and can cause them to crumble off the roof.

In 2019, the U.S. government decided to solve this problem by investing in composite shake roofing from DaVinci Roofscapes.

Problems of a Redwood Forest 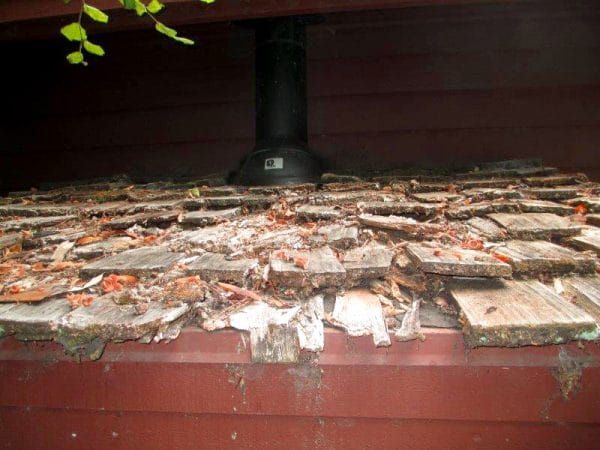 “The existing cedar roof on the visitor’s center was completely rotten,” says James Gardner with Southwest Construction, out of San Bruno, California. “Some parts of the roof were actually so deteriorated that we simply swept them away with a broom.”

Gardner credits the climate at Muir Woods as the culprit. “This area is like a rain forest,” says Gardner. “Real cedar shakes don’t have a chance at a long life in this environment.”

Indeed, take a walk among the old growth coast redwoods and you’ll feel the humidity. This is an area where fog settles in daily and the sun doesn’t often penetrate the giant trees.

More than 812,000 visitors came to Muir Woods in 2019. It’s part of the Golden Gate National Recreation Area near San Francisco. Most of those people stopped at the visitor’s center for directions, to register for hikes or check out trail maps. With the unsafe roof over the structure, government officials knew a change was needed—and fast.

“We installed the Bellaforté Shake roof in December of 2019,” says Gardner. “Timing was important. The roof had to be completed in the slow guest season, and, most importantly, when the protected spotted owls were not actively mating. We only had a two-month window in the winter to complete the job.”

Southwest Construction was sensitive to all the challenges of the project. Due to its many years as a government contractor, the company’s forces hold security clearances allowing them to work in high security facilities. The company is in its 20th year of business, and works on sensitive projects requiring the utmost of attention and care.

For the Muir Woods project, once removal of the decayed cedar shakes was complete, the re-roofing moved along swiftly. The new Mountain color composite shakes now blend in perfectly with the wooded setting.

Why DaVinci for Muir Woods?

According to Gardner, the DaVinci composite shake was specified as an option for the Muir Woods Visitor’s Center.

“We chose to stick with the DaVinci option because of its ability to achieve a Class A Fire Rating,” says Gardner. “That’s really important in this densely wooded setting. Plus, the Canadian tariffs are very high right now for real cedar. That also made it more cost effective to use the DaVinci product as compared to a good class B cedar shake.

“The DaVinci products are made in Kansas. They’ve been tested and have achieved many important ratings, like Class 4 impact and high wind resistance up to 110mph. And, for this project, it’s remarkable that these composite shakes are made to resist the growth of mold, algae and fungus.

“The visitor’s center DaVinci roof you see installed today is what you’ll see a decade from now. Or, even several decades. That’s impressive for this project in Muir Woods, or for homes and structures across America.”