Before classes start at any college or university, there’s always a frantic “move in” weekend for students. For 756 first-year and returning residents at the University of Minnesota, settling in at the school’s beloved Pioneer Hall was extra special this year.

Established in 1934, the five-floor student housing facility underwent a massive renovation in 2019. The exterior of the outside wings were left standing. However, everything else was torn down and reconfigured.

As part of the rebuilding effort the university needed a new roof to top off a new Pioneer Hall. That’s when DaVinci Roofscapes came into the picture. 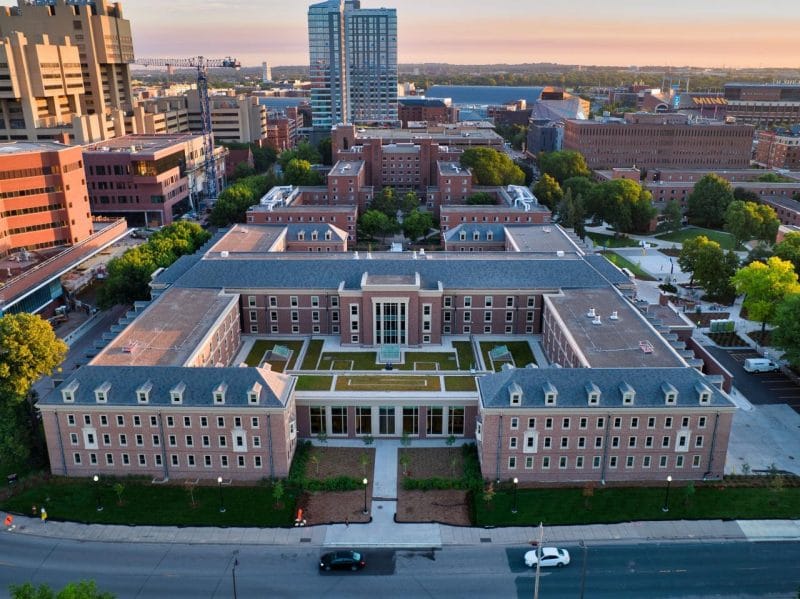 Renovations of the massive student housing structure total $104 million for the new dining hall and a modern residence hall. Architects designed an open concept for the building with meeting spaces and computer labs. There are also meditation rooms and many extras to make life on campus comfortable for students.

“We’ve previously worked on several historic renovations on the UM campus,” says Jesse Turner, onsite project manager for McGough Construction, the general contractor for the project. “For everyone involved it was very important to match the historical aesthetics of the original building exterior with the renovated project.

“The DaVinci Multi-Width Slate product got approved for this project because it so authentically duplicates real slate. Yet, at the same time, there are many benefits of having a top-quality synthetic roof. The impact- and fire-resistancy, plus low maintenance aspects are huge benefit for the university.”

When it came time to add the new roof, Central Roofing Company was brought in to tackle the year-long project.

“We started by making presentations of product options to the project architect,” says Henri Germain, project manager/estimator with Central Roofing Company. “The architect moved forward with the DaVinci product because of the aesthetics, value and long-term benefits to the university.”

“The capability of DaVinci to develop the custom color blend was amazing,” says Germain. “The roofing colors really complement the dormitory plus other structures on campus. I believe this was a ‘trial building’ with the DaVinci products. There are several other buildings with a similar footprint to get done. I imagine this roofing color blend might be used again on campus.”

After months of work by a team of 25 Central Roofing Company employees, the roof at Pioneer Hall was finished in time for move-in before autumn classes started.

“Our team worked on every aspect of the roofing,” says Germain. “This included the DaVinci roof plus sheet metal, green roof, the built-up roof membranes and the rubber roofing membrane.

“This was such a special project. Aside from the sheer size, it captures the heart. When we look at the finished structure we’re extremely proud. Our team played a big part in re-establishing Pioneer Hall as a key building on the University of Minnesota campus.”