Frank Lloyd Wright. Just the name brings to mind images of beautiful homes. So, when the team at Allrite Home & Remodeling had the opportunity to work on one of Wright’s creations, they jumped at the chance. A year later, the newly-added DaVinci Single-Width Shake roof brought the team industry recognition along with praise from Frank Lloyd Wright enthusiasts.

A Piece of History

The home, located on the shore of Lake Michigan, is located in Racine, Wisconsin. It was designed and built in 1905 by Frank Lloyd Wright for attorney Thomas P. Hardy. The stucco finished front, intricately detailed windows and breathtaking waterfront views make this a home like no other in the neighborhood. 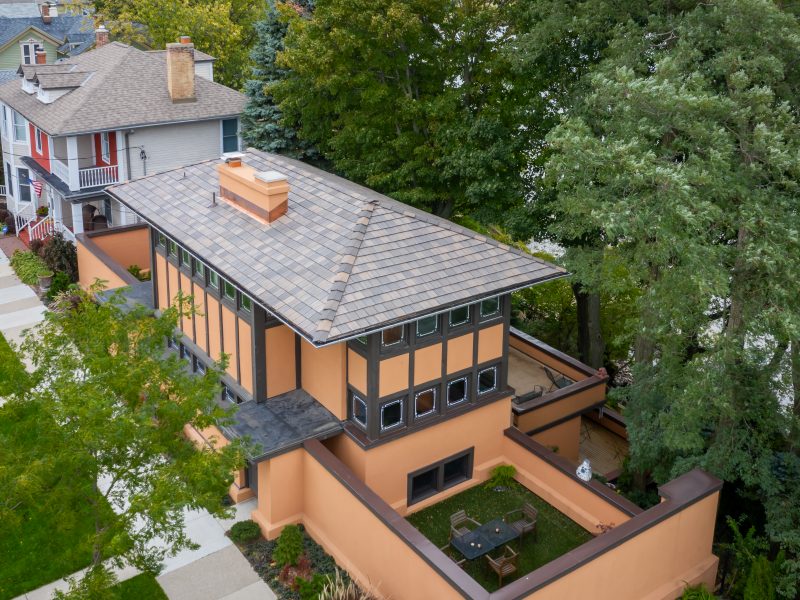 Listed on the National Register of Historic Places in Wisconsin, the Thomas Hardy House has changed hands seven times. In 2012 the then-homeowner began working to restore the home to its former beauty.

The exterior was repainted to the original terracotta color. The foundation was jacked up and rotting beams were replaced. And, original light fixtures and pocket doors were all restored.

As the restoration progressed, Allrite Home & Remodeling was brought in by the home’s newest owner to tackle the roof.

“The homeowner had three very important priorities for this historic renovation project,” says Randy Miller, owner of Allrite Home & Remodeling. “First, they wanted cedar shake, just as Frank Lloyd Wright had intended for the roof. However, they wanted to take advantage of modern advances in materials.

Many years prior, previous owners had asphalt roofing installed on the home, which was not consistent with Frank Lloyd Wright’s style. After reviewing a variety of products, the current owners decided on a composite shingle that simulates a cedar shake roof.

“The DaVinci product has the right quality, texture, color and warranty that the owners wanted,” says Miller. “The Single-Width Shake in the natural Aged Cedar coloring brought back the original appearance to the home exterior. As an added bonus, the composite shake shingle has a longer lifespan and will require far less maintenance.”

Overcoming a Variety of Challenges

Soon after the team started removing the old roof, they noticed significant fire damage to the rafters above the kitchen area. Apparently a fire in the early 1960s extensively damaged the inner structure of the roof.

“The current owners had no idea so much harm had occurred,” says Miller. “We proceeded to replace the damaged wood. That was important so the home will be structurally sound and able to support the new roof.”

According to Miller, safety was also a concern. The home is located on a steep bluff overlooking Lake Michigan. High winds were a challenge as the team worked to keep materials, tools and technicians secure.

Another challenge was the location of the home on a busy road. There was also a walled-in yard. This meant there was not a good staging location for materials or a dumpster. So the team found creative ways to work on the project. 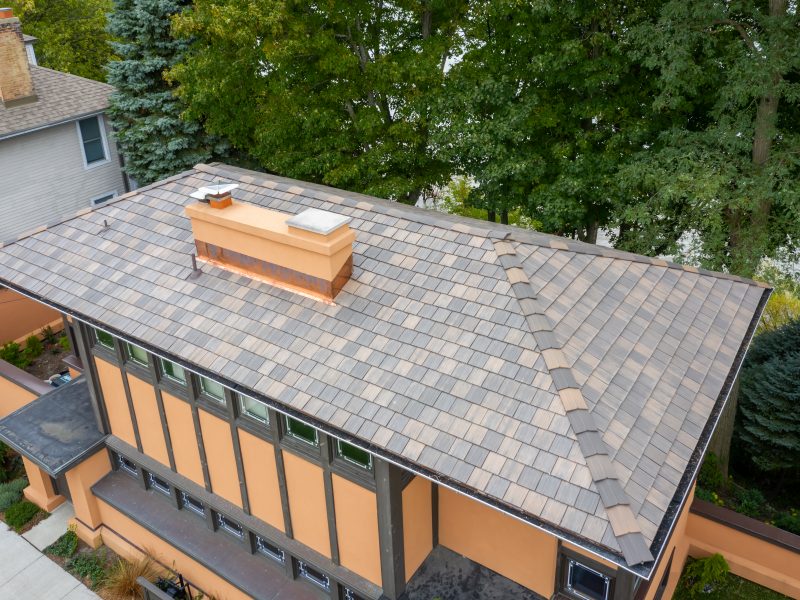 After the installation of the composite shake roofing came the finishing touch: copper accents. The area around the chimney had previously been plain brown flashing. It was decided to update it with copper flashing that will continue to add character to the home as it ages and patinas.

“Installing the copper without it rippling required our expert technicians to be extremely precise as they worked,” says Miller. “Then there was the added pressure of knowing that every step of this project was being scrutinized.

“There are Frank Lloyd Wright fans and enthusiasts both online and in our community who watched our progress closely. They wanted to make sure every step of the way that we honored the original design of the home.”

For their successful efforts, the team at Allrite Home & Remodeling won an award in the 2019 National Association of the Remodeling Industry (NARI) Milwaukee Remodeler of the Year Awards competition. The home received a Silver Award in the category of “Residential Historical Renovation/Restoration.”

“Our company has installed many DaVinci composite roofs during the past 15 years,” says Miller. “We’re proud of all of them. However, this project was a true labor of love.

“We’ve now added our mark to a beloved historical home in our community. Our entire team takes great satisfaction in knowing we were able to help bring a longer life to this Frank Lloyd Wright home.”