Want to know what it would be like to live in a spectacular show home? Ask Kelly Cadwallader. His new home was recently featured in Minnesota’s Artisan Home Tour. Before his family moved in, more than 20,000 people toured his house … and most of them were stunned by composite slate roofing overhead.

“At first I considered a standing seam metal roof,” says Cadwallader, the owner of Kelstone Concrete. “I have more than 30,000 square feet of high-end exterior concrete work installed at my new home. I just couldn’t see the metal roof working with that designer element. That’s when I was introduced to DaVinci Roofscapes. 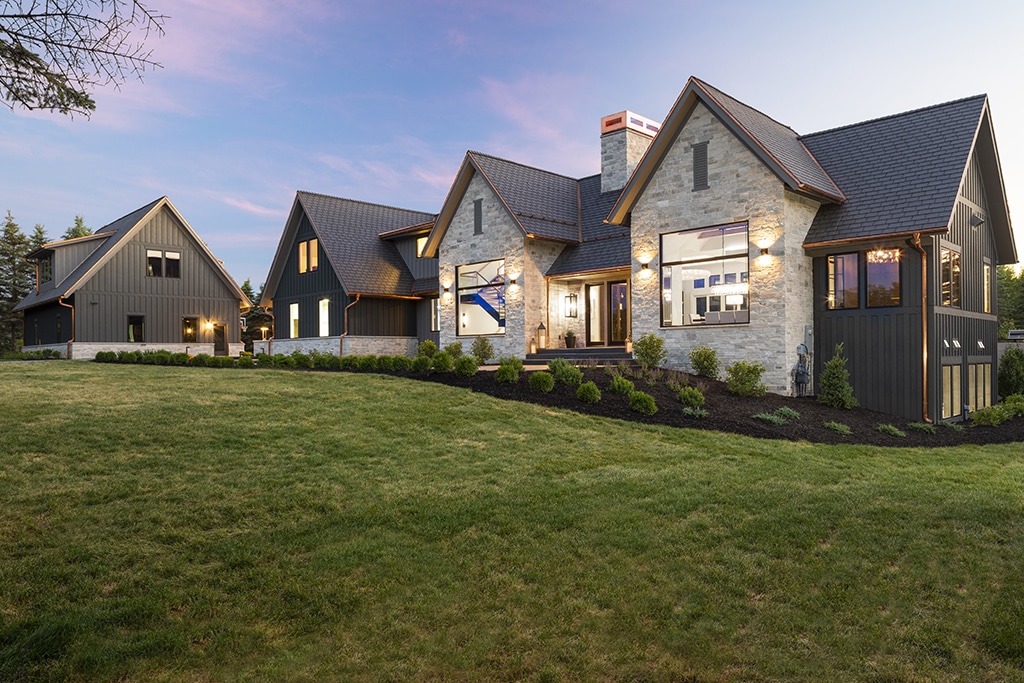 When the Roof Drives the Show

“We’ve mentored each other in all things about business and life over the years,” says Cadwallader. “So, when Brock showed me the DaVinci Single-Width Slate tiles, I was hooked. It’s such a sophisticated looking tile. When you consider both the appearance and function you get out of this faux slate tile, it’s a no brainer!”

Since Hartman Homes, Inc. designed Cadwallader’s home with such a strong roof line profile, the Summit Construction Group team decided to “go all in” to make the roof a stand-out success.

“We changed all of our exterior details based on Brock’s advice,” says Cadwallader. “From adding more stone, to beefing up the chimney size, as well as doubling the batten siding and adding bands to the James Hardi siding. In every way imaginable, Brock had the overall vision of this home exterior in his mind.”

The finishing touch for the roof is Cadwallader’s favorite part … the copper gutters. “They bring out the brilliance in the slate roofing,” says Cadwallader. “Right now I like the new, shiny copper look. When the sun comes up it literally looks like Christmas lights dripping off the house. It’s breathtaking.” 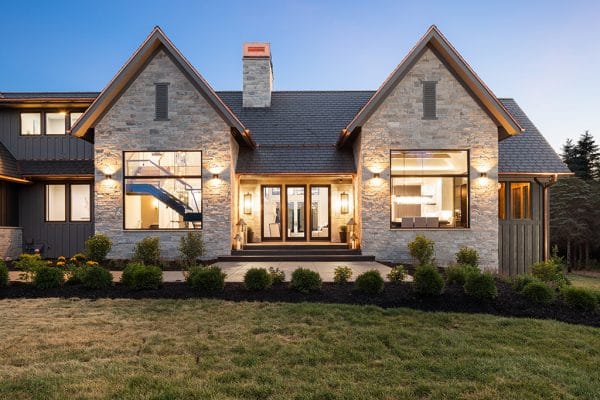 Making the magic happen for the roof was Brock Cadwallader and his team.

“The roof on this home is so big it had to have more aesthetic appeal than just traditional asphalt shingles or a metal roof,” says Brock Cadwallader. “As always, our mindset was a goal of providing slightly better than perfect.

“Especially for this house, the roofing product decision brings the completed house to the next level of excellence. The Slate Black tiles are show stoppers. They really seem to embrace the house and complement the stonework and siding.”

As part of his business, Cadwallader is seeing an upswing in sales of DaVinci products in the Twin Cities area.

“The DaVinci product has good value,” says Cadwallader. “There’s a great selection of product lines. The support staff is easy to work with. Most importantly, the appearance is terrific and the product is extremely durable.”

The house was complete and opened to the public in June of 2021. Two weeks later Kelly and his family moved in. Since then, poolside gatherings have included Brock and his family. You can just imagine the cousins gazing up at the completed house and smiling.