Alternative energy sources intrigue homeowner David Starling. That’s why, when he recently had a custom office/garage added to his property, he decided to include solar panels on top of his new DaVinci synthetic shake roofing.

“Solar, wind and nuclear energy sources are all necessary to move us away from fossil fuels,” says Starling, the former president and CEO of Kansas City Southern Railroad. “About 40% of the roof on our new structure faces south. That’s great exposure to capture and harness the sun’s energy.” 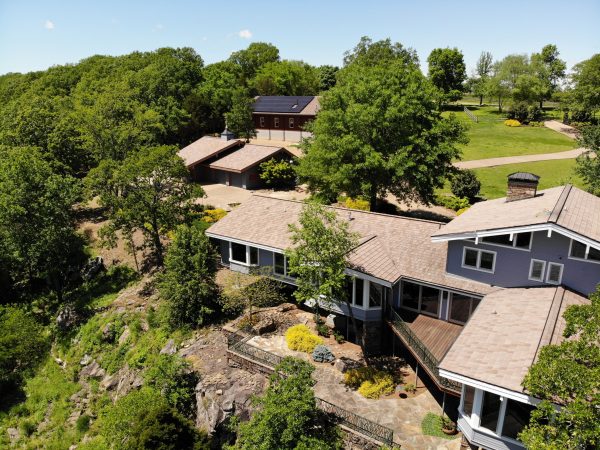 Long before Starling became enticed with solar energy, he and his family fell in love with their home in Fayetteville, Arkansas. The house was built in 1985. The Starlings purchased the property in 2014. Sometime in the almost three decades beforehand, the previous homeowner changed the roofing to DaVinci Multi-Width Shake. The new roof is an Autumn color.

“We added another 1,000-square-feet of space after purchasing the home,” says Starling. “Naturally, we stayed with the same synthetic shake shingles. We love the look of the roof material. In addition, we appreciate its long-term warranty.”

Over the years the Starlings have added to their estate. A variety of buildings now boast DaVinci shingles. These include the main house, cabana and separate garage.  There’s also a she-shed and now the new office/garage.

Architect Albert Skiles designed the new space that’s 38-feet wide and 92-feet long. There are four symmetrical bays in the office/garage to match the home’s style. In addition, there’s a set of floating stairs to a second floor.

“David was quite clear,” says Skiles, with Skiles Architect out of Fayetteville. “He wanted the same DaVinci roofing as on the rest of the structures.

“This is the first time we’ve worked with these composite shakes. They look really great on the new structure.” 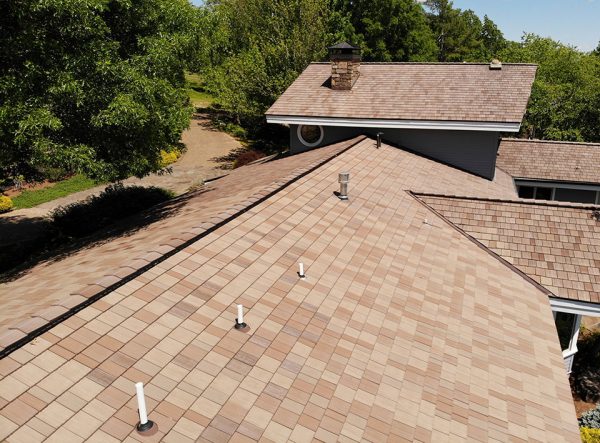 The team at MidCon Exteriors installed the roofing shingles on the new office/garage.

“This was an educational challenge for us,” says Connor Jones with MidCon Exteriors out of Lowell, Arkansas. “For instance, the architect’s design called for solar panels on the southern slopes. We worked with the solar panel company. This way we found the best way to install the panels over the synthetic shakes.

“However, it’s important to note that we didn’t want to penetrate the DaVinci tiles with a lag screw. That would compress the composite tile. A cavity would be created that we didn’t want.  It could hold water and eventually leak. We went another route. We found the solution with a QuickMount PV® QBase® Composition Mount.

“This base allowed us to mount the post and flashing like a traditional flashing. There was no screwing down from on top of the installed tiles. We feel confident that this final assembly will match the longevity of the DaVinci shakes.” 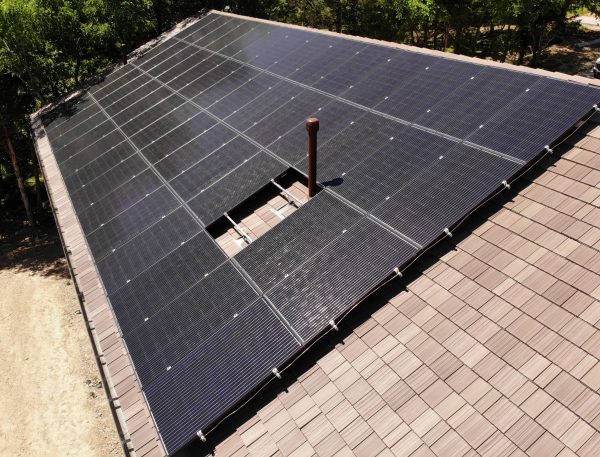 Once the composite shake roofing was installed, it was time for the solar panels.

Mission Solar manufactured the 55 panels for the structure. Each one of the MSE PERC 60 has 60-cell solar modules. Each module is fitted with module level electronics called an “optimizer.” The optimizer maximizes the output of each individual PV module. And, it enables monitoring of the system down to module level.

The MSE PERC 60 is a 60-cell white backed sheet solar panel. It has a class-leading 310 Watt power output. The system is engineered with PERC technology (Passivated Emitter and Rear Cell.)

Turning on the Sun

The team at Stellar Sun installed the solar system on the new roof. “This system is classified as a ‘straight’ net metering facility,” says Bill Ball, owner of Stellar Sun. “This is typically the most efficient and economic approach used for solar panels in Arkansas.

“For instance, the Starling’s system will produce around 2,000 kWh per month. There will be a slow degradation of one-half percent per year. This will happen over the expected 25-plus year life of the facility.”

Ball says that a residential solar facility in Arkansas will recapture its initial investment in 10 to 12 years. “Choosing a solar panel system is a solid investment,” says Ball. “In this situation, it allows the new structure on David’s property to help make itself self-sufficient from an energy standpoint.”