Built in 1978, the 57 townhomes in Chadds Ford Cluster in Reston, Va. all have cedar roofs. Until now. In many cases these real shake roofs are curling, brittle and in deteriorating condition. The solution? Thanks to the efforts of the community’s Standards Committee, synthetic shake tiles are now approved for roof replacements.

“In 2014 we decided to look into alternatives to real cedar. We wanted products with better characteristics related to fire, hail damage and maintenance,” says Norm Happ, a member of the Standards Committee at Chadds Ford Cluster. “That’s when we did online searches and discovered DaVinci Roofscapes.”

The approval process for synthetic shake was a bit complicated. Chadds Ford Cluster is one of Reston Association’s many clusters. 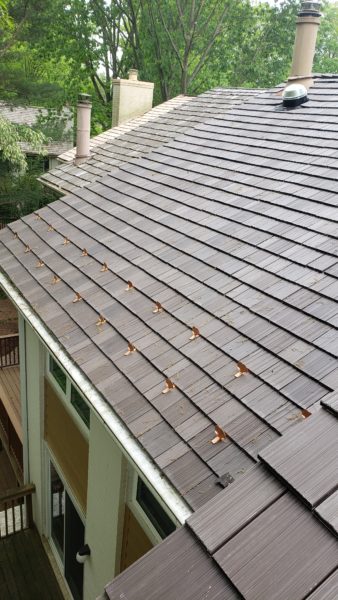 The Standards Committee spoke with the Reston Association. This group oversees the architectural and maintenance covenants regarding property improvements in Reston. They learned that DaVinci roofing tiles had been previously approved for some single family homes in the Reston area. However, they were not approved for townhouse communities.

Taking the next step, committee members selected several DaVinci color samples. Then they gathered cluster residents to vote on allowing an alternative to real cedar for roofs in their townhouse community. They also discussed choosing a preferred color.

Residents heartily approved of the Tahoe blend on DaVinci Multi-Width Shakes. Next, the Board of Directors at Chadds Ford Cluster was asked to approve the decision.

“With all those approvals in hand, the DaVinci Multi-Width Shake tiles in the Tahoe blend became a standard for the cluster in early 2015,” says Happ. “This means residents can easily install the synthetic shake roof product without filing an application. It was a big hurdle and we’re past that now.”

“The DaVinci tiles have a very uniform look to them without the imperfections that show up in cedar after a few years,” says Happ. “The warranty and resistance to fire, rot, impact and mold are impressive. They’re the key reasons I supported and chose this product for the townhomes.

“I’m interested in peace-of-mind and trying to make my house maintenance-free. Because our townhomes are so close to each other and ‘connected’ I’m particularly interested in the Class A fire rating of the DaVinci products. Basically, the roof is now one less thing I have to worry about for my home.”

“This is a very good looking roof that will last at least twice as long as real cedar,” says Happ. “Plus the excellent fire and hail damage resistance makes it a very good investment.

“This roof increases the current and resale value of the townhouse. That’s definitely an added bonus.”

Up on the Roof

When it came time for his roof to be installed, Happ turned to the team at LK Construction out of Annandale, Va.  The roofers were pleased to install the first new synthetic shake roofs in Chadds Ford Cluster.

“The existing cedar shakes on those roofs were about 20 years old and in pretty bad condition,” says Scott M. Kim, vice president/project management for LK Construction. “As with most older natural cedar shingles, there was an abundance of moss growth on them. There were also some broken and rotten shakes plus curling. Their lifespan was definitely shot.”

According to Kim, his team installs DaVinci composite roofing tiles on about 10 houses each year. Plus, they install the synthetic roofing on two or three commercial jobs.

“We don’t have any challenges when installing this synthetic shake product,” says Kim. “In this case, it was really special to install the first DaVinci roofs in this community. We’re hoping to be back soon to replace more of the roofs at Chadds Ford Cluster.”

As for Happ, he was a happy customer. “Scott Kim and his team were very thorough,” says Happ. “They provided timely answers to our many questions. I felt very confident working with LK Construction. We had a great experience with them and I love my new synthetic shake roof!”