Since the time Ken Slowik purchased his home, he’s also had to invest in buckets. Many buckets. That’s because his roof had so many leaks.

“We had leaks in almost every room, including ceilings and walls,” says Slowik, a resident of Stuart, Florida. “The home was built in 2000. We purchased it in 2012. For the past 8 years we’ve spent far too much on leak repair. Finally, the damage was just too widespread. We decided to replace the roof.” 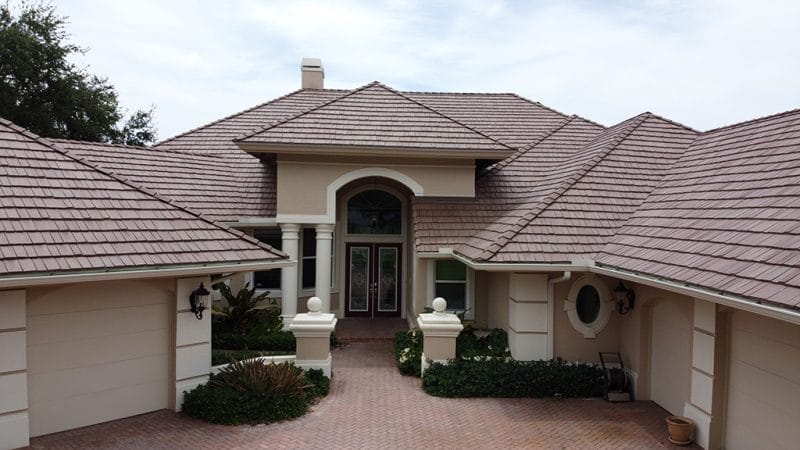 “Our old roof was installed using wooden battens,” says Slowik. “They were mounted horizontally as nailers due to the steep 7/12 pitch of our roof.

“Unfortunately water got underneath the tiles. Then it puddled on the wooden battens because there was no drainage. You can guess what happened next. The wooden battens started rotting. The nails loosened and rusted. Then we got leaks.”

Another problem the Slowik family discovered is that absorbed water caused the growth of mold.

“We are required to clean our roofs if they turn black,” says Slowik, a resident of Mariner Sands Country Club Community of 771 residences. “The cleaning was a continual expense and a headache.”

Tired of bailing out, the Slowik family bailed on their old roof.

Slowik researched stone coated metal roofs. However, he heard that they could also get moldy, which would mean more cleaning challenges. Plus, if you step on it wrong, it can dent.

“My research led me to synthetic roofing from DaVinci Roofscapes,” says Slowik. “Fortunately it’s one of the approved roofing products for our community.

“I discovered the Bellaforté synthetic shake tiles could be mounted on steep pitched roofs without wood nailers. Above all, it’s low maintenance. The roof does not need cleaning. And, it is a Class 4 rated roof. In other words, it will hold up to wind and hail. That’s important because we can get hurricanes in south Florida.” 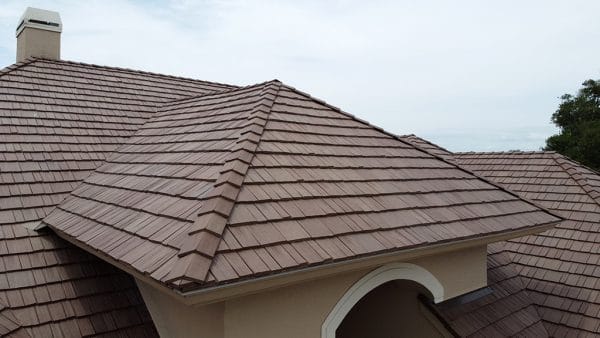 After deciding on synthetic shake, Slowik went in search of a reputable roofer. Fortunately his neighbor, a custom builder, recommended Walsh Roofing in Palm City, Florida.

“I’m very impressed with the team from Walsh Roofing,” says Slowik. “They are not the fastest or cheapest, but Michael Walsh is certainly the best. His team kept coming back until the project was absolutely perfect.”

To start with, the roofer had to replace 33 sheets of plywood. They were damaged and rotten from being wet under the previous roof.

After the roof assembly was ready, the roofing team made way for Vinyasun Solar. The solar team attached metal posts to support new solar panels on the roof. These were bolted through the underlayment into the roof trusses. Once they waterproofed their work, the roofers returned. They installed the Bellaforté Shake products in an Autumn color.

“This was like a ‘roof dance’ for more than a week,” says Slowik. “The DaVinci tiles were cut and installed around the support posts. Then the solar installer returned. He installed the panels onto the post. This gave us the best chance to have everything sealed properly.

“Compared to our previous roof, I think the synthetic shake looks better. The thickness and variety of the color shades add to the curb appeal of our home. In addition, the DaVinci roof has a Lifetime Limited Warranty!”

No More Leaks, No Electric Bills

Many of the residences within Mariner Sands have water heater panels. The solar panels are used to heat the water for swimming pools. At this time, the Slowik family is one of the few homes using solar panels for full electricity production.

“Our home is 4,750 square feet,” says Slowik. “We decided to install enough solar panels to eliminate our electricity bill completely.

“It will take 6 years with no electric bill to break even on the cost of this project. After that, we start saving from year 7 on.

“All the way around this is a winning project for us. Solar panels that save on electricity and beautiful synthetic shake no-leak roofing tiles that require no upkeep!”