Mustang Island Episcopal Conference Center sits on a barrier island off the south coast of Texas. The structures at the center are fully exposed to a variety of weather conditions. The synthetic slate mansard roofing on the buildings continues to hold up exceptionally well — even through rough weather.

Installed in 2017, the DaVinci Single-Width Slate tiles have survived everything from severe summer storms to a Category 4 hurricane. Just weeks after installation, Hurricane Harvey slammed into Mustang Island with winds up to 140 mph.

Standing Up to Storms

Most recently, Hurricane Hanna came ashore in Texas in July of 2020. With tropical storm winds close to a Category 1 hurricane, Hanna again challenged the conference facility. And again, standing up to storms, the synthetic slate tiles were unharmed.

“The DaVinci tiles on our buildings continue to hold up great,” says Kevin Spaeth, director of operations at Mustang Island Episcopal Conference Center. “We’re in a very exposed area. Straight line winds and storm surges are a regular occurrence for us.

“It’s remarkable that the DaVinci tiles look just as good today as they did when installed. Despite the searing sun and salt air, the color has not faded at all. Above all, the tiles require very minimal maintenance. That’s really great for our operations.” 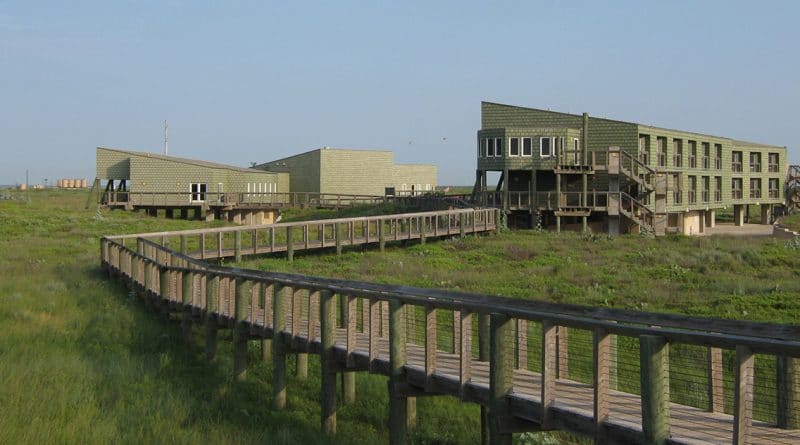 Mansard application roofs get full exposure to Mother Nature. At the Center, the roofing tiles are vertically placed. As a result, they also serve as siding on the structures.

In 2002 when the Center was first constructed, it had fiber cement products. After they failed, DaVinci tiles were installed in 2017.

The design firm of Richter Architects recommended the Single-Width Slate tiles for both the side wall applications and the roofs at the Center. Now, several years later, Richter Architects is again specifying the same DaVinci product. This time on several new structures being created at Mustang Island Episcopal Conference Center.

Within 2021 more housing units and a chapel will be added to the community. The buildings will also have mansard-style roofing. Similarly, they will also have the Single-Width Slate in the custom-color of Mustang Moss. This color is created by DaVinci especially for the facility.

Identified as a “model for barrier island environmentally conscious design” by representatives of the General Land Office for the state of Texas, the center has been recognized with several design awards. As Mustang Island Episcopal Conference Center continues to grow in size, the synthetic slate tiles will continue to stand up to the forces of Mother Nature … and perhaps laugh at her just a bit.